BJP leaders knew about the amount in IT raid: No, Priyanka Chaturvedi's claim is wrong

The claim that BJP leader Kailash Vijayvargiya already had information about the figure of raids conducted on the close aides of MP CM Kamal Nath is false because the figure was already disclosed by media much before his tweet.

Congress leader Priyanka Chaturvedi has claimed on Twitter that BJP leaders already knew about the figures of the raid. She then went on to accuse BJP of using institutions to swing the mandate in their favour in the upcoming Lok Sabha election. 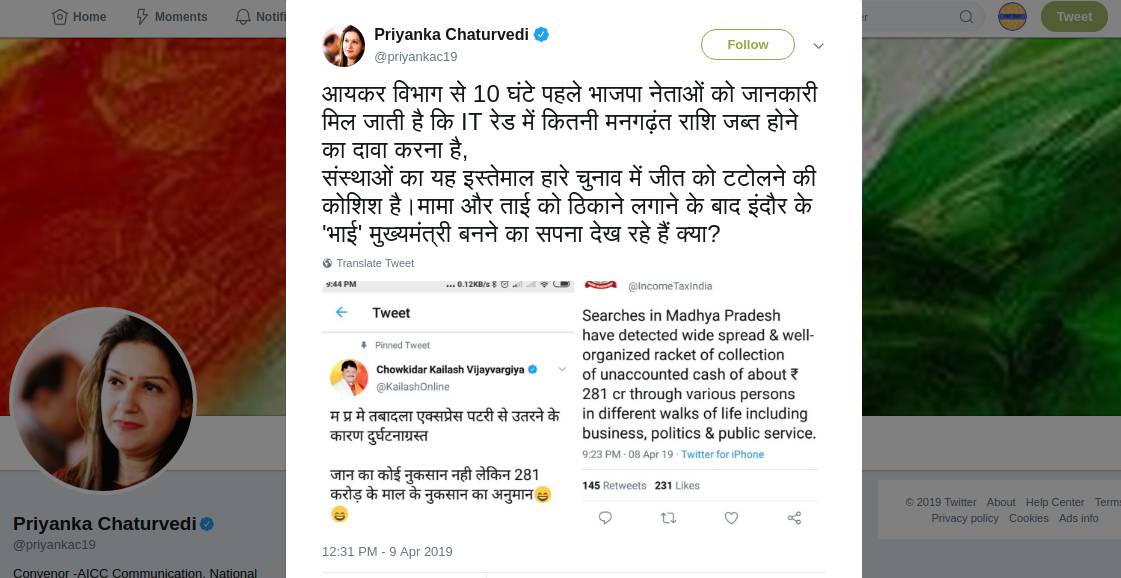 In her tweet, she included the screenshots of tweets by BJP leader Kailash Vijayvargiya and Income Tax Department's official Twitter handle. Since BJP leader had tweeted approx 10 hours before the official tweet came by the income tax department, Priyanka Chaturvedi claimed that he already knew the figures of the raid.

Indian Express has also reported that BJP has an advance estimate of the raids. The article reports:

Narender Saluja, Media Coordinator of Madhya Pradesh Chief Minister Kamal Nath, said: “How could the BJP leader come to know of the figure in the morning? What kind of collusion is this?”. He alleged the searches were carried out at the instance of the BJP and were “aimed at maligning the image of the Congress during elections”. 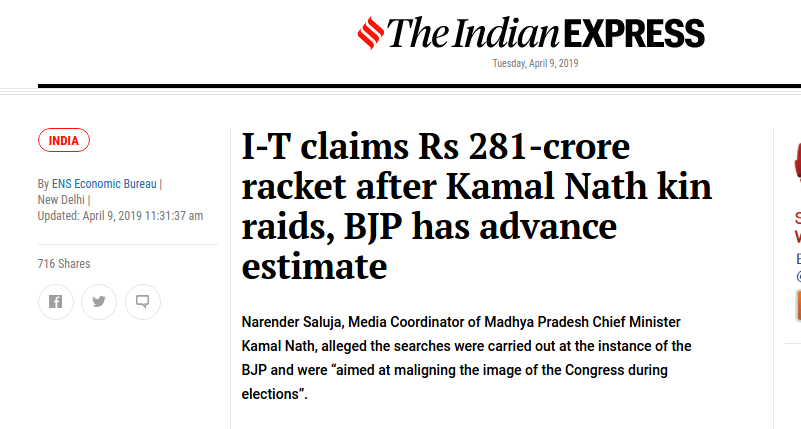 Times Now also questioned how did the BJP leader knew in advance about the figures of the raid?

When we searched about it, we found that a PTI's report was published by Economic Times at 10:25 PM on 7th April which is approx 12 hours before BJP leader tweeted the figure of the raid.

The report clearly says that undisclosed transactions worth Rs 281 crore are being scrutinised and a number of them have been seized.

Earlier, On 7th April, the Income Tax Department had launched pre-dawn raids at 52 locations, including in Delhi and Madhya Pradesh, against close aides of MP Chief Minister Kamal Nath and others on charges of tax evasion and hawala transactions.

Conclusion: The claim that BJP leader Kailash Vijayvargiya already had information about the figure of raids conducted on the close aides of MP CM Kamal Nath is false because the figure was already disclosed by media much before his tweet.