Fact Check: The viral quote about Hindu Goddess attributed to Shabana Azmi is not completely false

Shabana Azmi's claim that she has been falsely attributed to an infographic carrying insulting" remarks against Hindu goddesses in false. She had indeed tweeted a similar message during Dura Puja in 2017.

One of the finest actor in Bollywood, Shabana Azmi tweeted to claim that trolls have falsely attributed a quote to her and she has never said anything like that. Her tweet reads: "I have NEVER said this. It is DISGUSTING what trolls will stoop to polarise and communalise an already charged atmosphere. I work for all women irrespective of their religion". 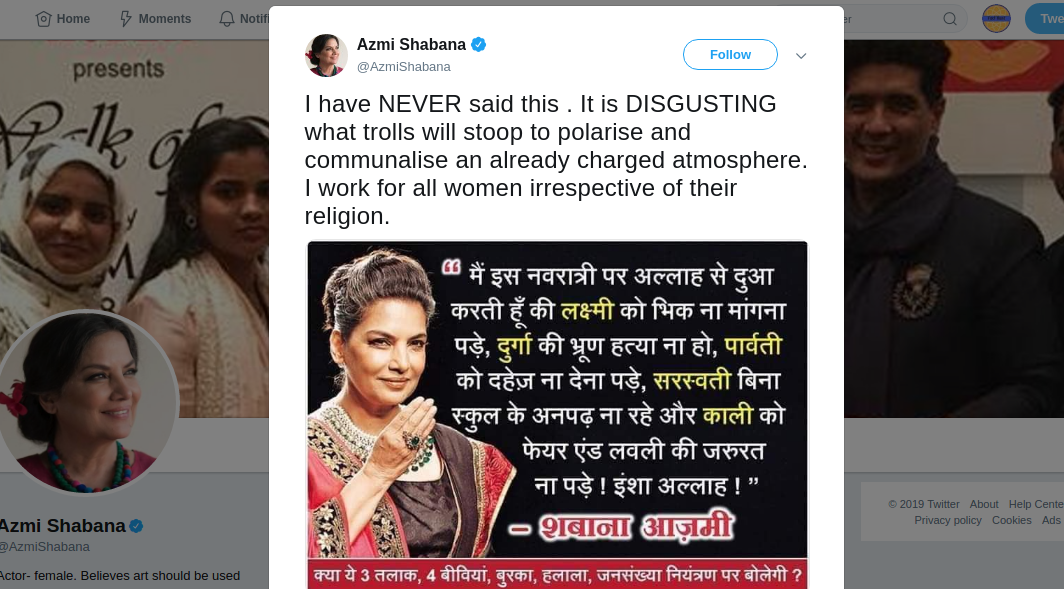 The text on the infographic reads "On this Navratri, I pray to Allah that no Lakshmi has to beg, No Durga is aborted, No Parvati has to give dowry, No Saraswati remains illiterate due to lack of schools, and No Kali has to use Fair&Lovely beauty cream. (Roughly translated from Hindi)" The message then ends with Inshallah. The message has been attributed to Shabana Azmi.

On the footer, it is written whether she will speak up against Triple Talak, 4 wives, Halala, and population control.

Is the message falsely attributed to Shaban Azmi as claimed by her?

A Twitter user Shashank Singh (@pokershash) pointed out that the message on the image was tweeted by her a few years back and shared the link of the old tweet. 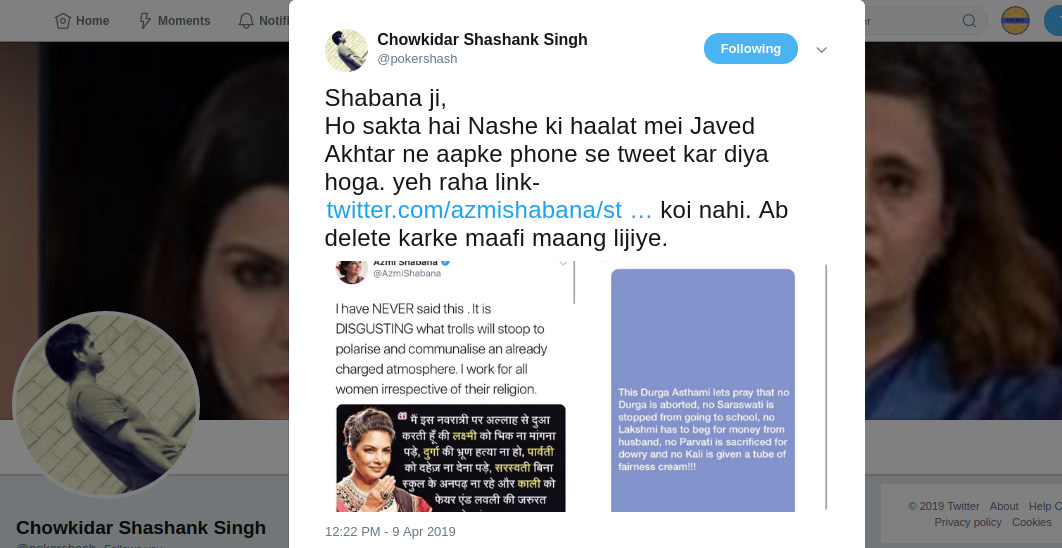 On September 29, 2017, Shabana Azmi had tweeted a picture with the viral message which reads: "This Durga Asthami lets pray that no Durga is aborted, no Saraswati is stopped from going to school, no Lakshmi has to beg for money from husband, no Parvati is sacrificed for dowry and no Kali is given a tube of fairness cream!!". 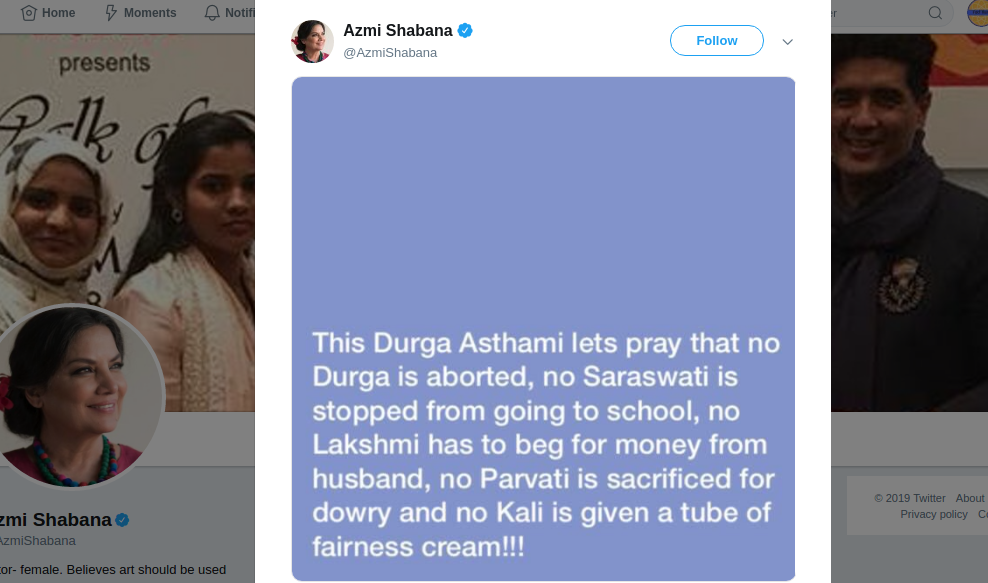 So, it is clear that while the overall message is the same, some points have been added in the viral image. In her tweet, she asked people to pray but in the infographic, it has been modified to "Let's pray to Allah". Also, in her tweet, she didn't end the message with "Inshallah".

Shabana Azmi is an atheist just like her husband Javed Akhtar and she did raise her voice against Triple Talaq called it against Indian constitution.

As per a report by Economic Times dated Aug 2018, Shabana Azmi said that triple talaq is against the Indian Constitution and had welcomed the proposed law that makes the practice of instant divorce illegal.

As a response to Sabana Azmi's tweet a fake quote has been attributed to Kangana Ranaut which says “This Eid, let us pray that no Aisha is married off at the age of 6, No Shah Bano is given Triple Talaq, No Meena Kumari has to undergo Halala, No Fatima becomes the fourth wife, No Shehla has to wear the burqa, No Ishrat becomes terrorist and no Mumtaz has to give birth to 14 children.” 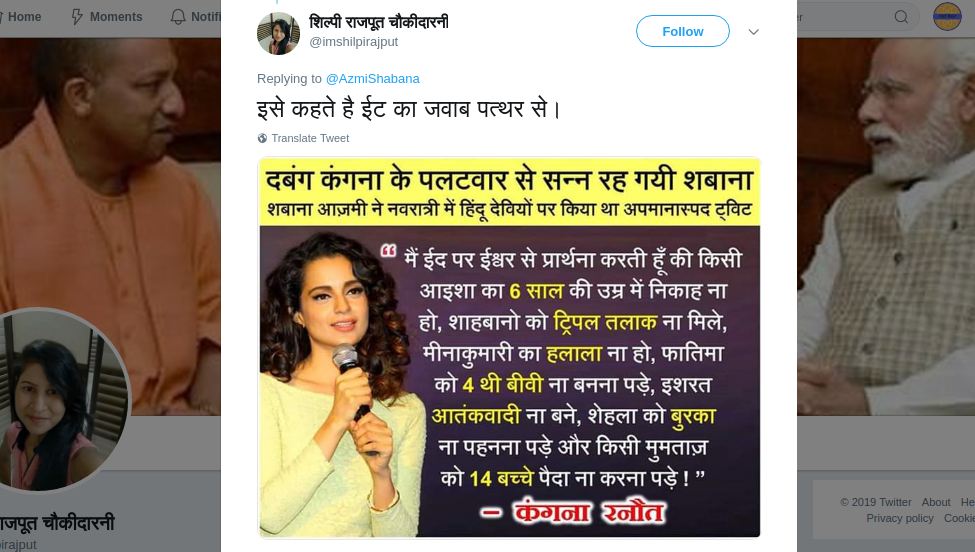 However, Kangana has never said anything like this. There is no record of any of her statement matching to what is being attributed to her.