Was Congress Leader Urmila Matondkar misquoted or she indeed called Hinduism the most violent religion?

In a video interview with Rajdeep Sardesai, Urmila Matondkar was clearly heard saying that the religion which has been known for its religious tolerance has turned out to be the most violent religion of them all". It is a bit absurd that she has now claimed to be grossly misquoted. 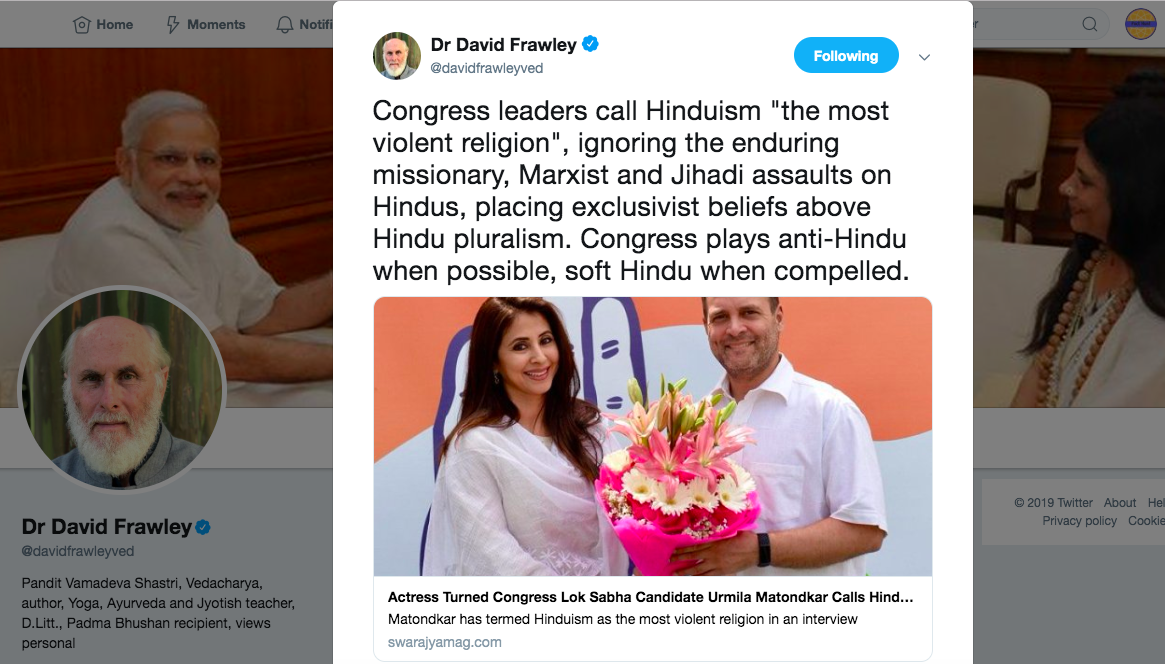 Whats wrong with Urmila? when she was hindu she was violent? N she is peaceful when she is converted..this is how love j!had works..

BJP's Mumbai spokesperson Suresh Nakhua tweeted "Con Candidate from Mumbai, Urmila Matondkar says: “The religion which has been known for its tolerance has become the most violent”!! This is abuse of Hindus !!!"

Suresh Nakhua then went ahead and filed a police complaint against the Congress leader.

Urmila Matondkar dismissed allegations that she called Hinduism 'the most violent religion' as ‘bogus, baseless’ after a complaint was filed against her by Bharatiya Janata Party (BJP) spokesperson Suresh Nakhua. she said that the complaint was bogus and filed with “ulterior motives”.

Matondkar said in a statement that the complaint was “ex facie bogus, baseless and filed with ulterior motives”. “I have been grossly misquoted by the complainant...with malafide intentions.

She said that during the interview she only objected to the “fake, divisive and violent ideology” being promoted by the BJP in the name of Hinduism to misguide people and bring disrepute to the great religion.

She also said that she believes in love and respect Hinduism in this sense and not in what BJP wants to promote.

Was she really misquoted?

In an interview with India Today’s Rajdeep Sardesai, she said that in the last five years has seen religious intolerance, politics of hatred and to counter it all she decided to join politics. When Rajdeep Sardesai asked her what she dislikes about last five years that all of a sudden she decided to join politics, she said that she likes nothing about the last 5 years and went on to allege that the “religion which has been known for its religious tolerance has turned out to be the most violent of them all”.

You can watch an extended version of the video here:

At 2:03 in the above video she said: "the religion which has been known for its religious tolerance has turned out to be the most violent religion of them all". It is a bit absurd that she has now claimed to be grossly misquoted.

Has Hinduism really become more violent in the last 5 years under BJP government?

It is true that several cases of lynching have been reported in last 5 years and BJP MP Jayant Sinha was found felicitating 8 men convicted of lynching a cattle trader in Ramgarh last year. But this doesn't prove that Hinduism has become more violent.

The people who are always ready to cry whenever a case of lynching is reported completely ignores the fact that Cattle smugglers are killing cattle owners across India and farmers are facing a threat to their life and livelihood.

In February this year, an activist was found brutally murdered in Tamil Nadu hours after he stopped Muslims from forcefully converting Hindus. As per reports, 42-year-old Ramalingam was assaulted in Kumbakonam in Thanjavur district on his way back home by a group of unidentified people and his hands were chopped off. Ramalingam died on the way to the hospital due to excessive bleeding. In Bihar, a man was beheaded in Bihar for naming a ‘chowk’ after Prime Minister Modi.

But again cherry picking of events will not serve any purpose. Right now there is not enough data to show whether Hindus have become more violent than other religion or not.