54,000 people about to go jobless in BSNL: No, CMD of BSNL denied the unverified media reports

Media reports that BSNL has approved the reduction of retirement age to 58 years from the existing 60 years is false. Other figures like 54000 people will be laid off are also false since it is a voluntary retirement service which can't be forced.

Dhruv Rathee who is a relentless purveyor of misinformation on social media tweeted on April 3 that 54,000 employees of BSNL are going to be sacked just after the election.

He had shared the link of a report by Deccan Herald for the reference. 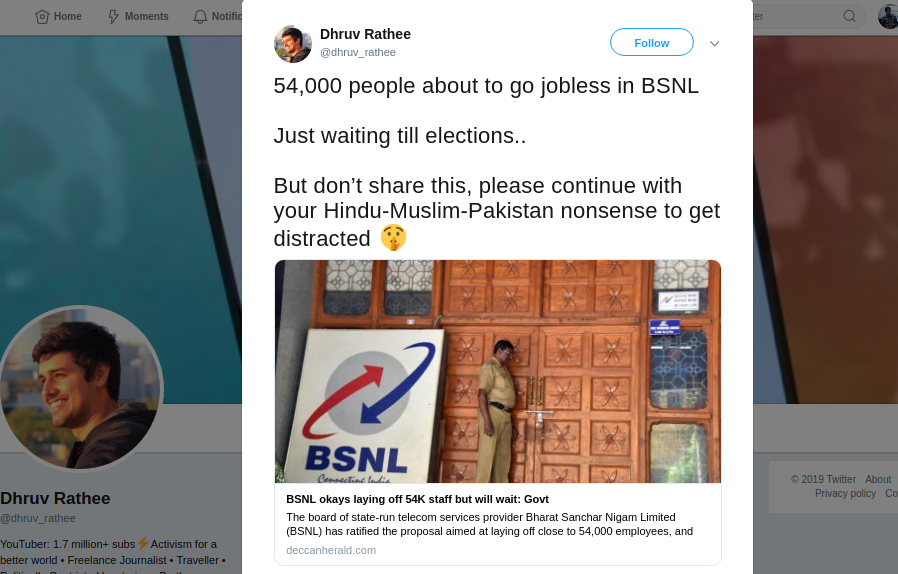 The Deccan Herald has reported that Bharat Sanchar Nigam Ltd (BSNL) has accepted a proposal to lay off close to 54,000 employees and is said to be waiting for elections to get over before taking the final call. Referring to some unknown sources, the reports states that the BSNL board has approved three out of 10 suggestions put forth by an expert panel set up by the government.
The report further states that the Department of Telecommunications (DoT) is unlikely to implement the layoff proposal until the elections are over and the officials are waiting for the new government to take a final call on this issue

As per the report, the recommendations that were approved by the board are a reduction of retirement age from the present 60 years to 58 years, Voluntary Retirement Scheme (VRS) for all employees aged 50 and above, and expediting the allocation of 4G spectrum to BSNL. The decision on retirement age and VRS will see the exit of around 54,451 BSNL employees, which is 31% of its 174,312-strong workforce.

Anupam Shrivastava, the Chairman and Managing Director of BSNL tweeted to deny the media report. His tweeted that the turnaround of BSNL is being devised by the Department of Telecommunications (DoT) and BSNL which includes the allotment of 4G spectrum and offering lucrative VRS to willing staff which means that if an employee is ready to retire then they will have the option to retire voluntarily with a lucrative package. It is not being forced on any employee.

Mr Shrivastava then went on to add that reduction of retirement age or laying off employees is not being considered at all. He then denied the media reports about the rumour of laying off.

The story was covered by News 18 as well whose headline suggests that 54000 employees are likely to lose the job. However, in the last line of the report, it is clearly written that the exact number can't be determined as it is a voluntary scheme and can't be forced on employees. Since the scheme is for all the employees above 50 years of age, media assumed that all the employees above 50 years old will be affected which is clearly a false assumption.

All the clarifications were available on April 3 but still, Business Insider published a poorly researched article on April 4 to claim that the board of the Bharat Sanchar Nigam Ltd (BSNL) has approved slashing 54,000 jobs in order to relieve financial stress.

Business Today also published the unverified claims that the board of state-run telecom operator Bharat Sanchar Nigam (BSNL) Limited has approved the proposal to lay off over 54,000 employees. The report also states that BSNL has approved the reduction of retirement age to 58 years from the existing 60 years.

Can Dhruv Rathee be blamed for sharing this?

Dhruv Rathee has shared a report by mainstream media and can't be blamed for sharing it. However, it's been 2 days since the clarification was issued by the CMD of BSNL which was pointed to him by many social media users but still, he hasn't tweeted the clarification.
As it stands his tweet in current form is misleading since the exact number of affected people can't be determined and moreover, this can't be considered a layoff since it is a voluntary service.