Separating Facts from Rumours: Islamization of Pakistan and the fate of minority-communities. 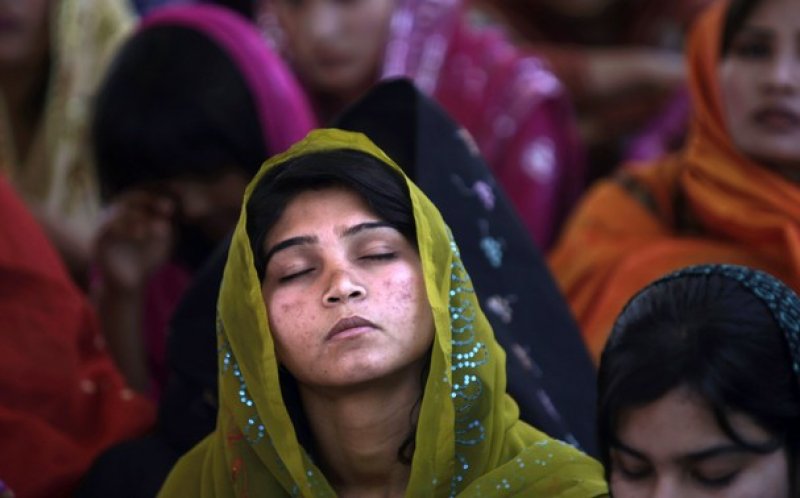 Pakistan Prime minister Imran Khan in December last year had said: " will show Modi's India, how to treat minorities". AIMIM chief Asuddudin Owassi had retorted by saying learn from India about minority rights and inclusive politics and Mohammad Kaif (former cricket player) also had replied on Twitter: "There were around 20% minorities at the time of Partition in Pakistan, less than 2% remain now. On the other hand, minority population has grown significantly in India since Independence. Pakistan is the last country that should be lecturing any country on how to treat minorities." 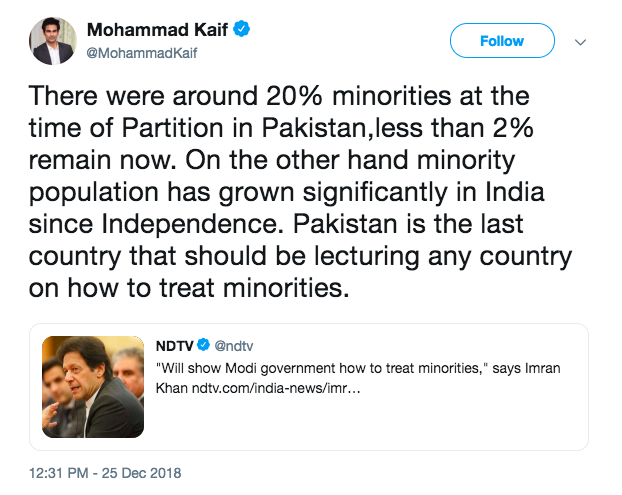 Many people then claimed that the minority population of West Pakistan was just 1.6%. While East Pakistan (Now Bangladesh) had 22%. 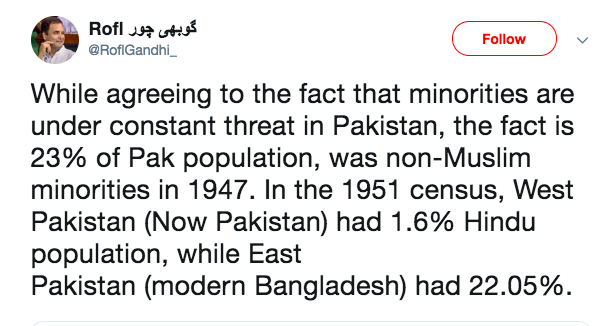 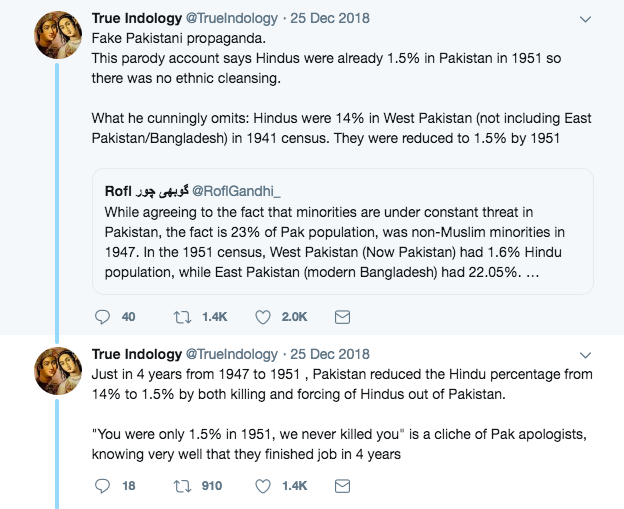 In this post, we analyze the plight of minorities in Pakistan, the trend of Islamization, atrocities on religious minorities, developments responsible for it and thus the irony of the statement. We clarify commonly held believes about minority population in Pakistan.

The Quaid-e-Azam and founding father of Pakistan Mohammad Ali Jinnah’s famous speech of August 11, 1947, clearly envisaged for a nation with secular beliefs. He wanted Pakistan to be a land of all communities – Hindus, Muslims Christians, Sikhs having say in forming government policies. Even though the state was founded on the notion that Hindus and Muslims formed separate nations.

Jinnah had said “You are free, you are free to go to your temples and you are free to go to your mosques or to any other place of worship in this state of Pakistan. You may belong to any religion or caste or creed – that has nothing to do with the business of state---we are starting in the days where there is no discrimination, no distinction between one community and the other. We are starting with the fundamental principle that we are all citizens and equal citizens of one state.”

But the country’s successive successors have deviated grossly from this ideal. This famous speech of Pakistan’s founding father too had been suppressed for a considerable time.

The minority population in Pakistan (East and West Pakistan) has seen a steep decline since independence. At the time of independence, religious minorities consisted of 25% of the total population—it has reduced to 3% now. Meanwhile, the population of Muslim majority saw an upsurge, it consisted 96.28% of the total population in 2017 according to Pakistan Statistical Bureau. National Assembly of Pakistan was told in 2014 that around 5,000 Hindus are migrating from Pakistan to India every year, the Dawn reported.

However, it must be noted that when Pakistan was formed, a large non-muslim minority population, stayed in East Pakistan (Bangladesh). The non-muslim religious minority in West-Pakistan consisted of 1.6% and 22% in East-Pakistan in 1951. 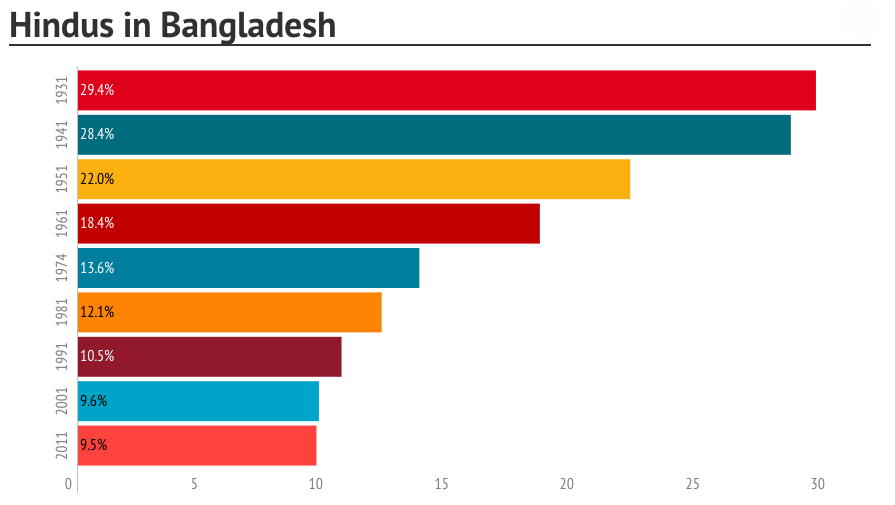 A report also claims that after 1951 there was an exodus of Hindus from East and West Pakistan. The report points that out of 7 million Hindus and Sikhs migrating from East and West Pakistan, 5 million came from West Pakistan. Hence it should be kept up that non-muslim minority population in West-Pakistan were comparatively lesser than East Pakistan during the initial years of Pakistan (West) independence. It won't be an exaggeration to add here that Pakistan non-muslim population though marginally have grown since 1951.

However, over the years, atrocities on minorities have been numerous ranging from forced conversion, kidnapping for ransom, burning of houses. Farahanaz Ispahani a former Member of Parliament, Pakistan, writes – Even the graveyards have not been spared, regular reports of graves being excavated and vandalized appear in the press. These atrocities, to a large part, are attributed to Blasphemy laws, section 295-298 of the Pakistan Penal Code (PPC).

The defining moment for Pakistan Islamic shift and gradual transformation came in 1949, immediately after the demise of its founding father Mohammad Ali Jinnah in 1948, when the Objective Resolution, defining the fundamental principle for Pakistan’s constitution was passed by the constituent assembly.

The resolution meant that sovereignty of state legally vests in ‘Allah’ and not in the people of Pakistan. This move was opposed by religious minorities but to no avail, the state was tempted towards Islamization.

Amidst growing intolerance against non-muslims in society came the reign of Mohammad Zia-ul-Haq, who had overthrown the elected government of Zulfiqar Ali Bhutto. During his reign he brought crucial and stricter amendments to section 295, bringing clause ‘B’ and ‘C’ in it.

Whoever willfully defiles, damages or desecrates a copy of the holy Koran or an extract therefrom or uses it in any derogatory manner or for any unlawful purpose shall be punished with imprisonment for life.

Whoever by words, either spoken or written, or by visible representation, or by any imputation, innuendo or insinuation, directly or indirectly, defiles the seared name of the Holy Prophet (peace be upon him) shall be punished with death or imprisonment for life, and shall be liable to fine.

These laws were mostly used as tools to seek vengeance, harassment and to intimidate religious minorities.

The above table implies that 55% of blasphemy crimes were committed by Muslims and 45% by religious minorities who constitute 4% of the total population. 4% population amounting for 45% blasphemy rules violations speaks a lot. With Pakistan’s growing propensity with Islam there have been numerous reported incidents where a false case of blasphemy was registered—or even just alleged from a mosque—and non –muslims got no chance to defend them.

Farahanz Ispahani writes, Pakistan blasphemy laws have targeted religious minorities on a regular basis with around 20-25 kidnappings of Hindus happening every month in Sindh. In August 2010 in the town of Gojra in Punjab, seven Christians were burnt alive, 18 others injured and at least 50 houses set on fire. As a member of parliament, I vividly recall the calls for help from Gojra’s Christian and the effort that had to be made to get Punjab provincial government and army to go in and defend the population from bloodthirsty zealots she concludes.

Pakistan’s allegiance towards Islamisation is felicitated by texts embodied in text-books. They are allegedly propagandists, present distorted History politics and social studies, support aggressive nationalism and use of Islam to justify policies. The Social Development Policy Institute report entitled The Subtle Subversion brings out. Pakistan has truly deviated from the envisaged identity of and is transformed itself as a nation with religious identity.