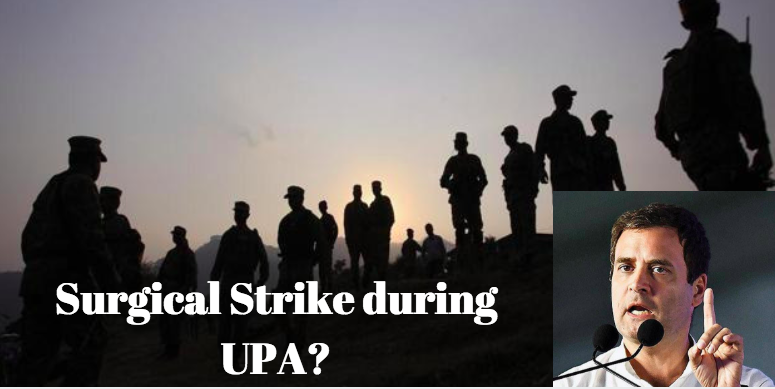 Rahul Gandhi was caught misleading the people by claiming that 3 surgical strikes were conducted during the UPA rule under then prime minister Manmohan Singh.

Congress president Rahul Gandhi while speaking at a function in Udaipur in the poll-bound state of Rajasthan said that 3 surgical strikes were conducted during the UPA rule under then prime minister Manmohan Singh.

This is not the first time when Congress leaders have made such claim. Earlier this year in June Congress spokesperson Randeep Surjewala had also made a similar claim. He had listed eight "surgical strikes" conducted prior to 2016. He said:

What is the Surgical Strike?

In response to an RTI application seeking the definition of the term Surgical Strikes in the army record, the DGMO replied: “As per the information available in ‘open source’ the definition of ‘surgical strike’ is ‘…an operation which is planned based on specific intelligence, on a legitimate military target for maximum effect and with minimum or no collateral damage. It involves deliberate insertion to the target area, precise execution and swift extrication of the body of troops back to the base’.”

An RTI application was filed to ask the Defense Ministry if the “surgical strike” mentioned by the DGMO in the press statement of September 29, 2016 was the first ever in the Indian Army’s history or not. It also enquired whether the army had conducted a “surgical strike” between 2004 and 2014.

A few days after the surgical strike in 2016, Director General of Military Operations from 2012 to 2014, Lt Gen Vinod Bhatia had countered the Congress's claims of cross-border strikes during his tenure. He said the surgical strikes now and the operations then "can't be compared". "Earlier strikes, they were not even strikes, they were cross-border operations done at the local level". You can watch his statement here:

Conclusion: In response to an RTI about Surgical strike during the UPA  governance, the DGMO of the Indian army stated that there never been a surgical strike before September 29,2016. Hence Rahul Gandhi's claim is false.