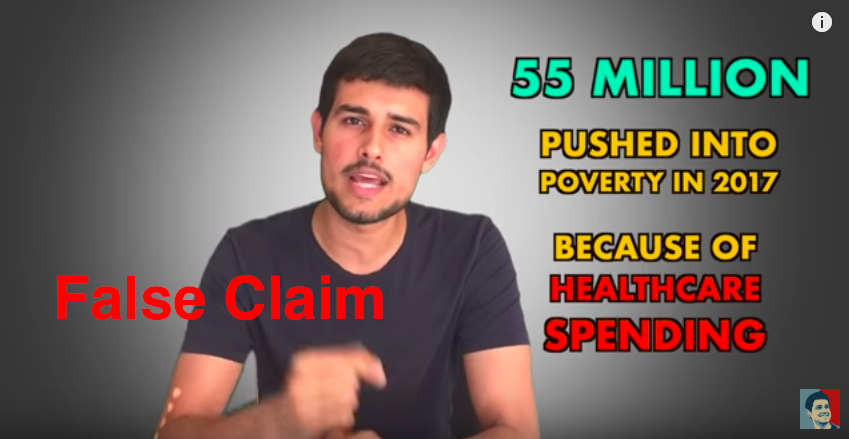 Dhruv Rathee was caught misleading his followers again in his recent video related to Ayushman Bharat. As per research quoted by him, 55 million people were pushed to poverty in 2011-12 and not in 2017 as claimed by him.

Dhruv Rathee has released a new video to create awareness about the situation of health and care in the country. It was a good video and we must congratulate him on this video because he has raised some important questions.

At the very beginning of the video, he claimed that 55 million (550 crores) Indians were pushed into poverty due to health expenses. The description of his video reads

"Believe it or not! 55 million Indians fell below the poverty line only because of healthcare spending in just one year - 2017. This was revealed by Public Health Foundation of India study. Out of these 55 million, 38 million Indians plunged into poverty because of the money people spent on medicine expenses."

An Open Letter, a popular Youtube channel pointed out on Twitter that the claim made by Dhruv Rathee is not correct. The message in the tweet reads "Dhruv rathee caught lying again. He is blaming the failure of Congress on the present government by misquoting the year. This scoundrel pretends as Messiah of truth and frequently spreads lies. Anyone who exposes his hypocrisy is mass-reported by his squad. Share to spread the truth". 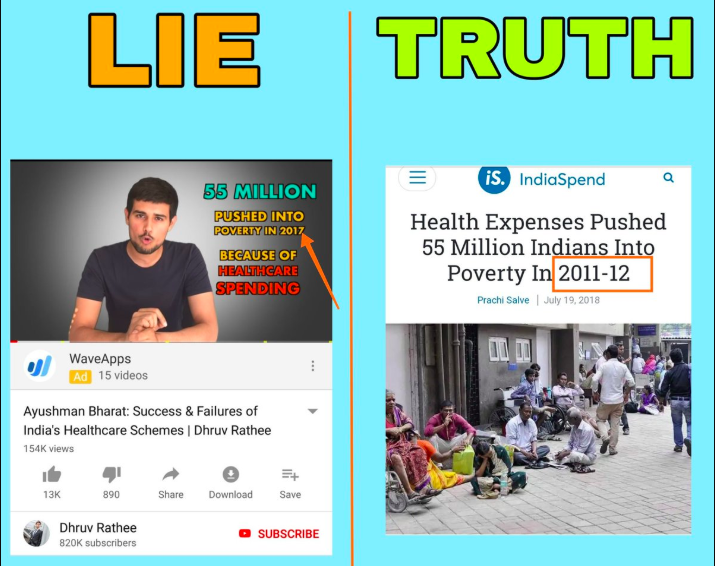 While it's true that Dhruv Rathee has formed a squad to mass report the profile which dares to expose his lies. You can see the comments and ratings on our facebook page. We had exposed his squad a few days back. You can read it here:

Part 1: Exposing Dhruv Rathee and his squad - an undeclared IT Cell of Aam Aadmi Party

When we search for the data online, we found few articles with similar headlines claimed as claimed by Dhruv Rathee. Daily Hunt had reported on 19th July that Health Expenses Pushed 55 Million Indians Into Poverty In 2017. We found similar articles on many websites like the business standard, drprem.com with the same claim.

There are many articles (TOI, Economic Times) claiming 55 million people were pushed to poverty but all those articles have clearly mentioned that data is for 2011-12.

We found that the origin of all these articles is indiaspend.com which is a data journalism platform. The title of the article on Indiaspend.com is "Health Expenses Pushed 55 Million Indians Into Poverty In 2011-12" but in the URL of the article, it is 2017. See the highlighted section in the image below.

At the bottom of the article, they have clearly mentioned that they had published the story because of error as the figure is for the year 2011-12 and not for 2017.

Other websites published this article but never bothered to update it even after the clarification by India Spend.

Perhaps Dhruv Rathee's team never bothered to check the full story at India Spend which is very surprising since he claims that all his videos are well researched and they always give the primary source. When we watched his video, he has not given any reference to his claim. He only said that this was revealed by Public Health Foundation of India's study.

But as per study "Out-of-pocket (OOP) health expenses drove 55 million Indians--more than the population of South Korea, Spain or Kenya--into poverty in 2011-12, and of these, 38 million (69%) were impoverished by expenditure on medicines alone".

We contacted India Spend through email for clarification and they replied that they had updated the article on 19th July itself (the same day they had published the article).

In fact, they had tweeted about their mistake on the same day. 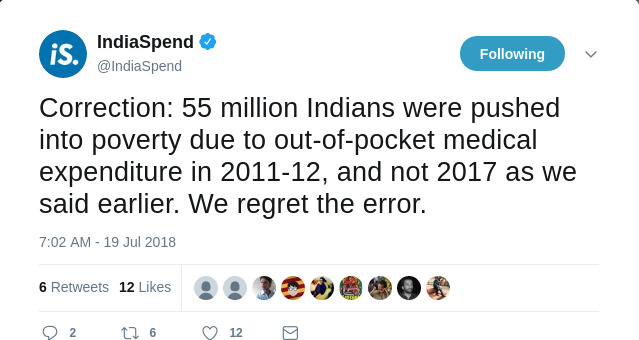 We always try to look for primary sources whenever we do research on any topic. Now it's impossible to imagine that Dhruv Rathee's team wouldn't have read this article by India Spend. If they read it and ignored the correction then Dhruv Rathee is misleading his viewers (we can call it lying as well). And if he or his team didn't read this article, then we have some serious doubt on their research capabilities.

His video has more than 1.5 lakh views and damage has been done. He should make a video and apologise to his viewers for this mistake and clarify how did this mistake happen.

Now we have one question for Dhruv Rathee and his team:

1. Did you or your team read the article by India Spend or not.

Hope people will get the answer in your next video.

Note: Healthcare is a very important sector in which we need improvements and appreciate Mr. Rathee for raising this issue. But we expect better research from him.

Well, this is not the first time he has made mistake. Earlier we had exposed how his entire video was based on misquotation and lies. Read it here:

In another post, we had exposed his numerous lies and misquotation to prove that he is a relentless purveyor of misinformation. You can read it here: