It is clear though several farmers sustained injuries in the police lathi charge in Karnal, this picture was taken in 2013 after two CISF jawans were shot at by terrorists in Srinagar.

The Haryana Police lathi-charged protesting farmers at Karnal’s Gharaunda toll plaza on 28 August (Saturday). The farmers had been protesting against a BJP meeting chaired by Chief Minister Manohar Lal Khattar on the upcoming panchayat polls.

Amid this, a picture of two police personnel washing bloodstains off the road is getting viral on social media linking it to the police action against farmers in Haryana’s Karnal.

A Facebook user name Pradeep Punia Matloda shared a post with a claim that "It is a matter of great sadness that the blood of farmers is flowing on the roads. Before coming into power, they talk so much about farmers and later you can see for yourself." 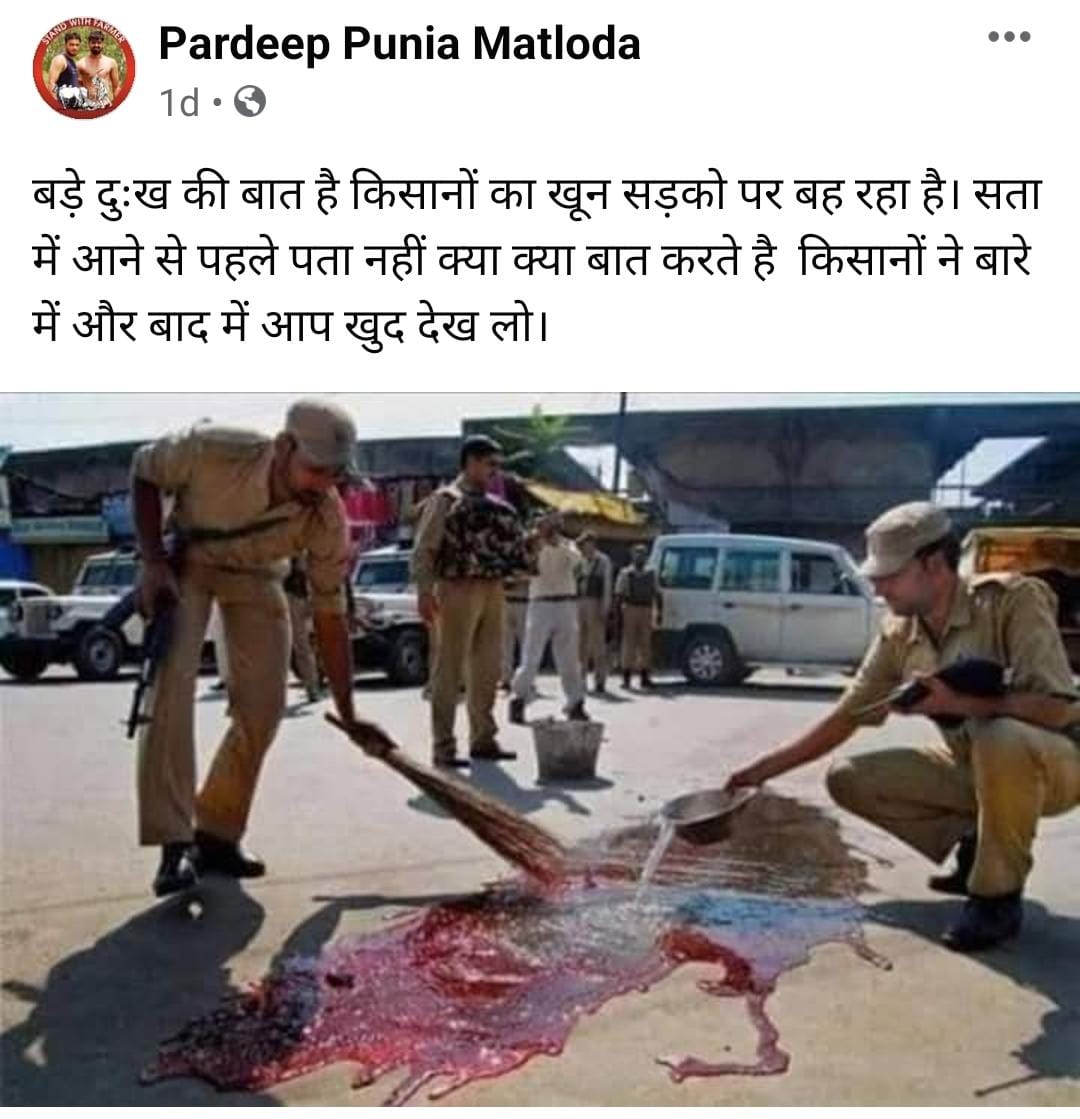 In our investigation, we found that the viral claim is misleading. The image was taken in 2013 after a terror attack in Srinagar.

After doing reverse image research on Google, we found the same picture in a photo gallery of The Indian Express published in October 2013. The picture was taken on September 23, 2013, with credits to PTI. 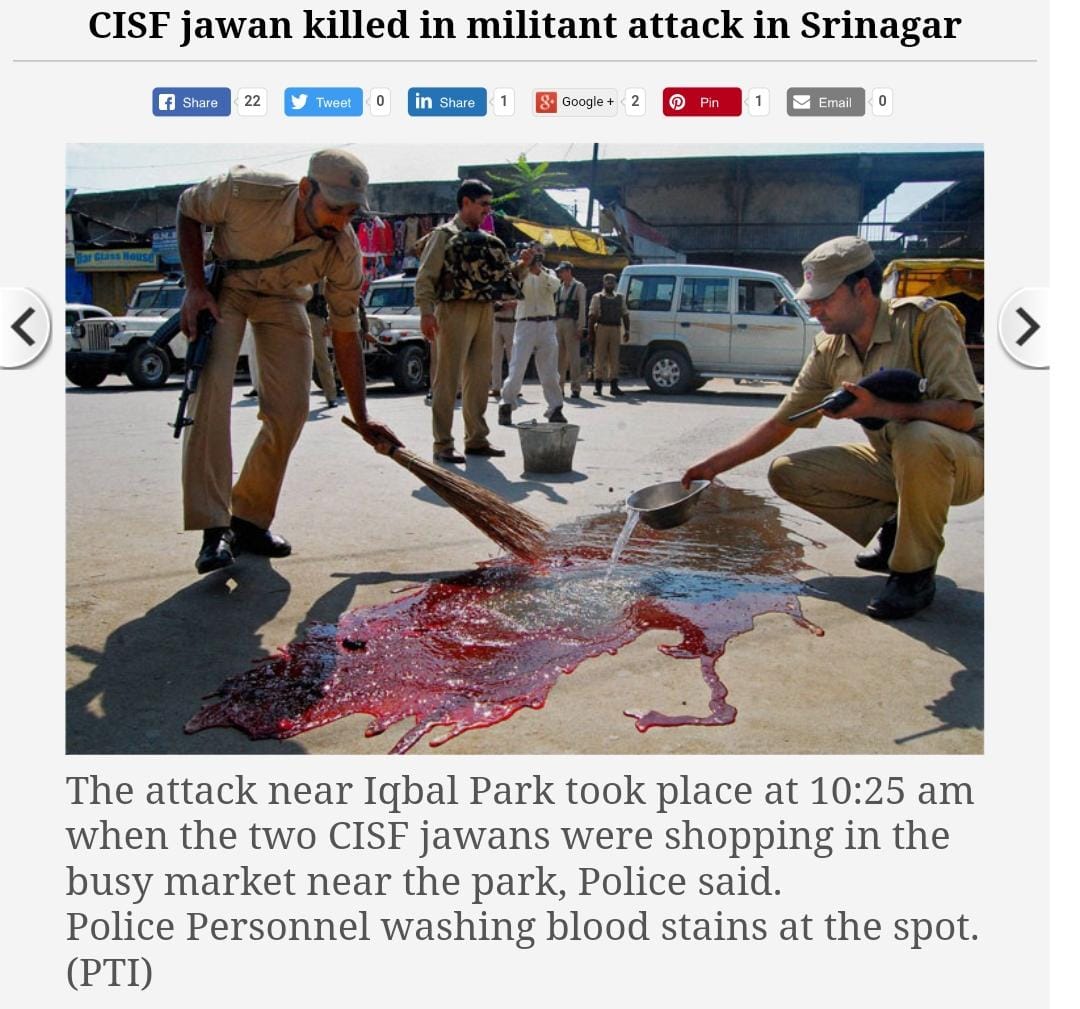 The description of the photo reads "The attack near Iqbal Park took place at 10:25 am when the two CISF jawans were shopping in the busy market near the park, Police said. Police Personnel are washing bloodstains at the spot. "

We also found a news report of The Hindu dated September 23, 2013. As per the report, two militants attacked two Central Industrial Security Force (CISF) jawans who were out shopping in the busy market near Iqbal Park in Srinagar. The jawans were rushed to a hospital in Srinagar, but one of them succumbed to the injuries.

Further, A similar picture was also carried by stock image site Alamy. The image was credited to Altaf Zargar. 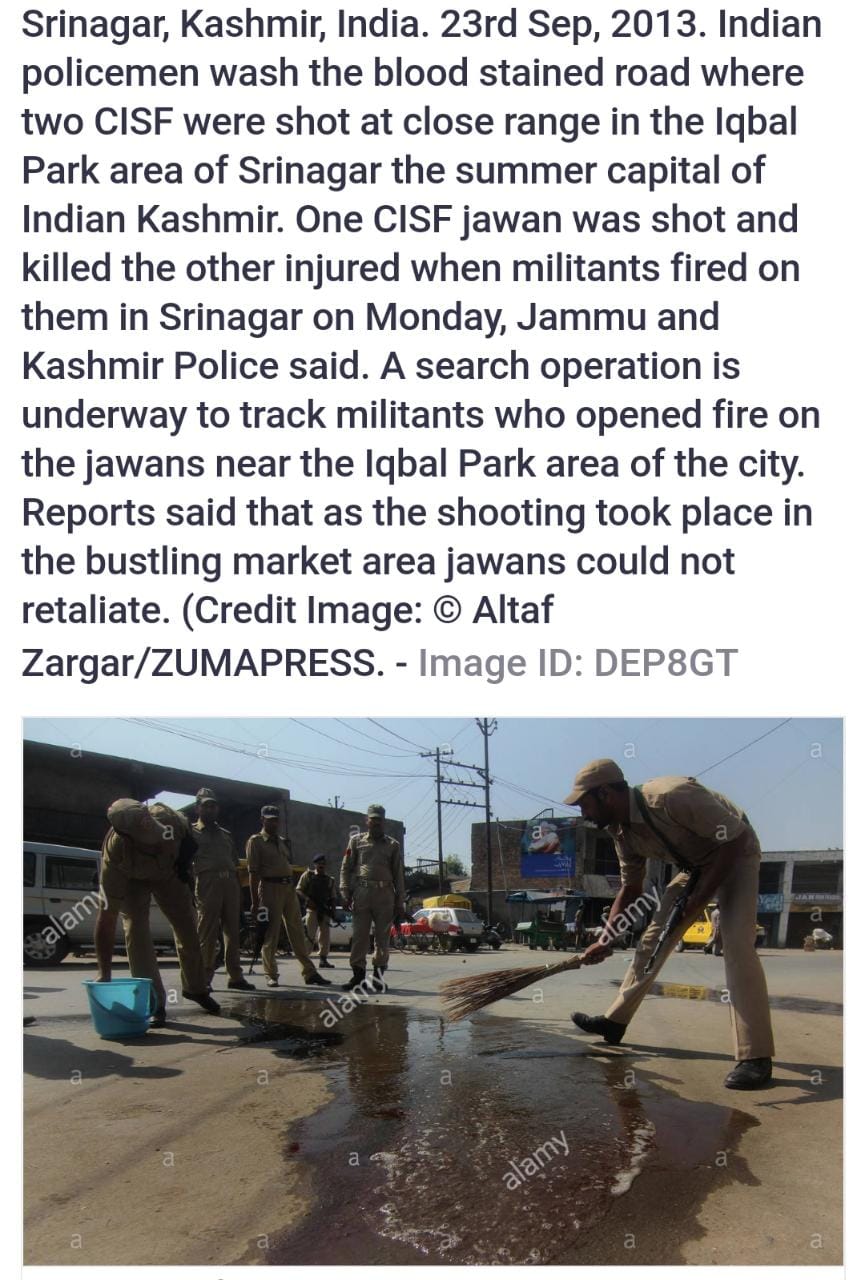 However, as per the media reports, around 10 people were injured on Saturday as police allegedly lathi-charged a group of farmers disrupting traffic movement on a highway while heading towards Karnal in Haryana to protest against a BJP meeting. The police, however, said only four protesters were injured, while ten cops also sustained injuries.

According to the Indian Express, the Haryana Police had cracked down on farmers protesting in Karnal, leaving several injured in a lathi charge at the Bastara Toll Plaza on the national highway. The farmers had been protesting against a BJP meeting chaired by Chief Minister Manohar Lal Khattar on the upcoming panchayat polls. Police detained several people using force to disperse a crowd that was blocking the highway in Karnal.

In conclusion, it is clear though several farmers sustained injuries in the police lathi charge in Karnal, this picture was taken in 2013 after two CISF jawans were shot at by terrorists in Srinagar.