A video of two policemen drinking alcohol while sitting on the bonnet of a police car is getting viral on social media with a claim that the video is taken during the regime of CM Yogi Adityanath. In reality, the video was taken during the tenure of former Chief Minister Akhilesh Yadav.

A video is getting viral on social media where two policemen can be seen drinking alcohol while sitting on a bonnet of a police jeep. It is being claimed that this is a video of Uttar Pradesh where the police are openly drinking alcohol. Targeting Chief Minister Yogi Adityanath, it has been said that under the Yogi government, the people of UP are more afraid of those in khaki uniform than the goons.

A Facebook page shares the video with a claim that “In Yogi’s government, the people of UP are more afraid of khaki uniforms than goons. Look at the police, they are drinking alcohol openly in broad daylight, this is the duty of these policemen. Uttar Pradesh Jungle Raj." (Translated from Hindi) 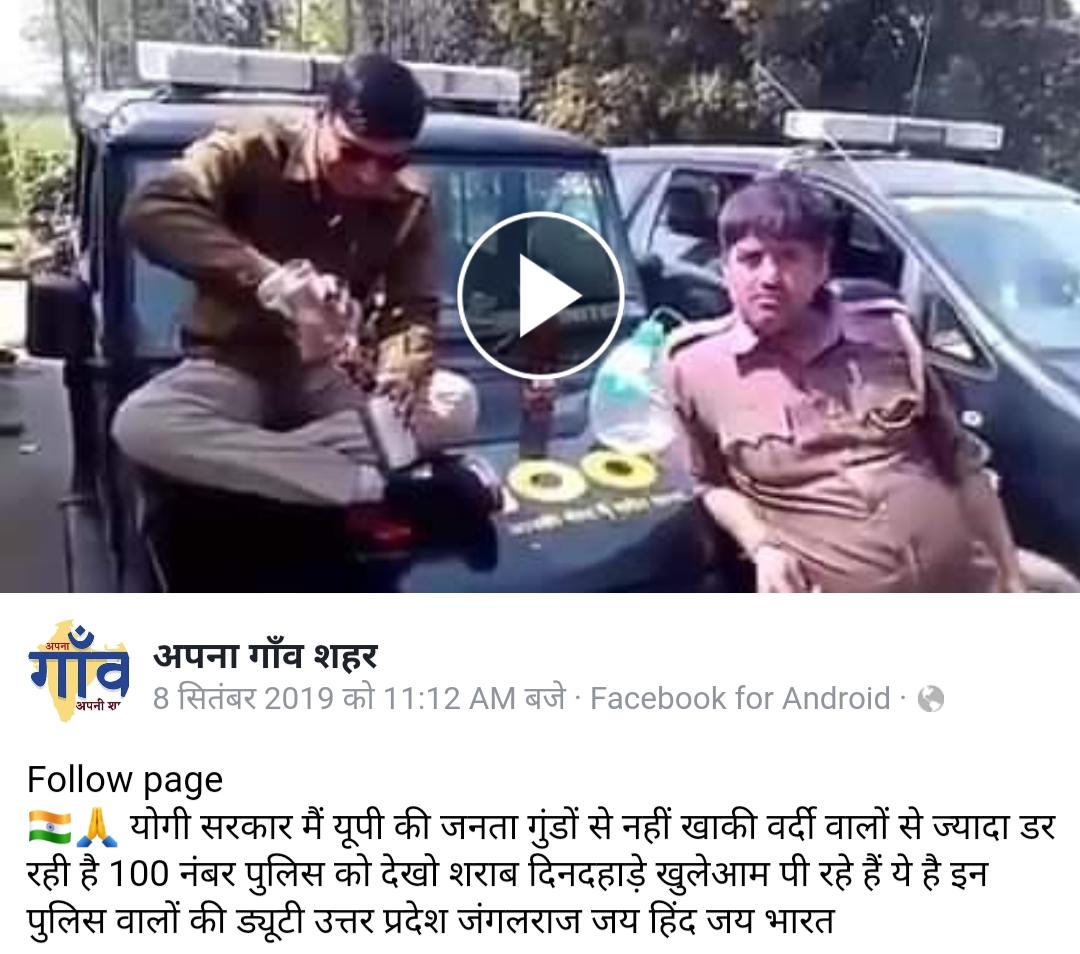 The same video is also getting viral on Twitter with the same claim. 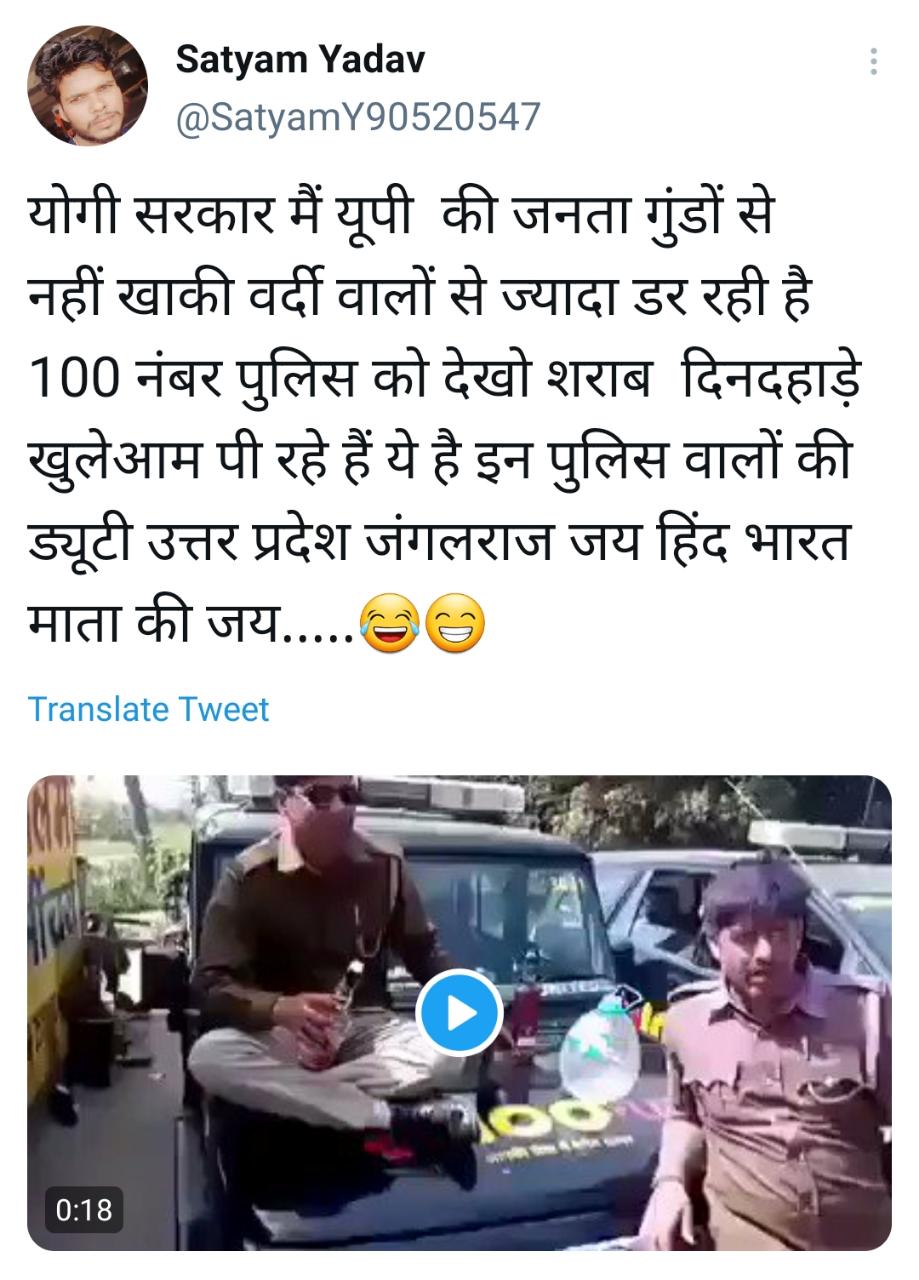 In our investigation, we found that the viral claim is misleading. This video is from Uttar Pradesh but was taken during the tenure of former Chief Minister Akhilesh Yadav.

On searching the video with the help of related keywords, we found some news reports related to it. According to a report of The Financial Express published on March 15, 2017, the Bahujan Samaj Party had targeted and exposed the reality of UP police- Dial 100 service. The party had uploaded a video of two drunk cops on duty. They are sitting on their official vehicle, a black SUV, and drinking “liquor” at an open highway in Shamli. 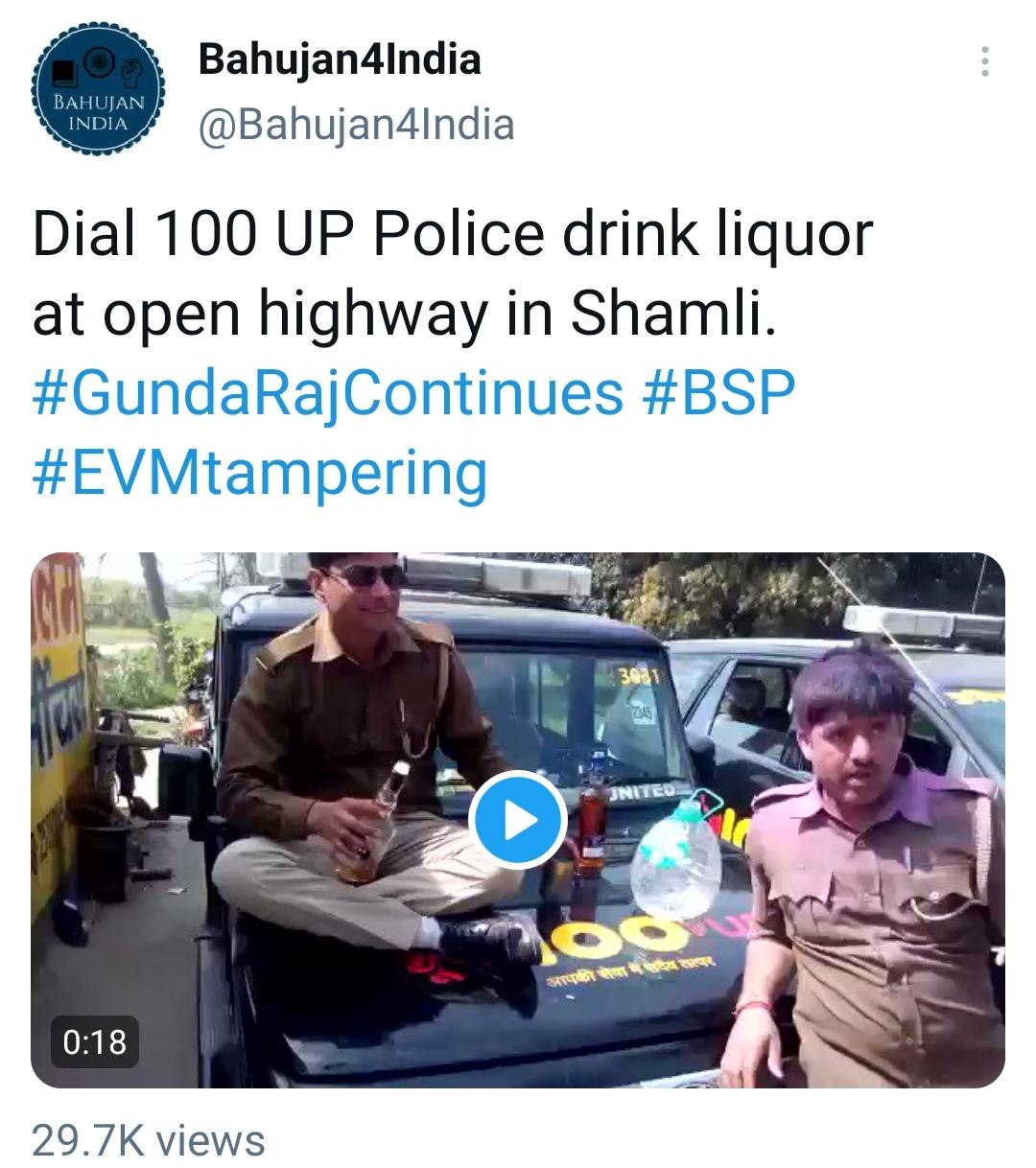 According to the report of "News Nation", this video is from Shamli in UP where police constables were openly drinking alcohol on the bonnet of 'Dial 100' car near Titauli outpost. This video was uploaded by "News Nation" on March 14, 2017.

Both the policeman seen in the video were drunk. The video was shot on the day of Holi and the cops are also talking carelessly and dancing in drunkard position besides drinking “liquors”. While one of the two cops was making drinks, the other one – completely drunk – was saying that it was the festival of police and they will drink and perform their duty at the same time. After the news of dial 100 policemen drinking alcohol went viral, three policemen were suspended by SP Ajaypal Sharma.

It is also noteworthy that the results of the 2017 UP assembly elections were declared on March 11 and Yogi Adityanath took oath as the chief minister of Uttar Pradesh on March 19. That is, the video is before Yogi became the Chief Minister and it cannot be called as an incident of Yogi tenure.

In conclusion, a video of two policemen drinking alcohol while sitting on the bonnet of a police car is getting viral on social media with a claim that the video is taken during the regime of CM Yogi Adityanath. In reality, the video was taken during the tenure of former Chief Minister Akhilesh Yadav.