The man in the viral image is not Father Stan Swamy but Baburam Balwan Singh, a convicted murderer, who was admitted at a government hospital in Uttar Pradesh's Etah.

Father Stan Swamy, a Jesuit priest and tribal rights activist, arrested in the Elgaar Parishad case, passed away on July 5 following a cardiac arrest at Holy Family Hospital in Mumbai.

Amid this, a picture of an elderly man sitting in a hospital bed on oxygen support and his feet chained to the bed is widely shared on social media with the claim that the man in the photo is late Fr Stan Swamy.

A Twitter user name Anil Chaturvedi shared a post with a claim that "No Civilized Country would treat an unwell 84yrs old under trial like this, keeping him in the jail itself is against Justice System! #RIPFatherStanSwamy Injustice to you will NEVER be forgotten!" 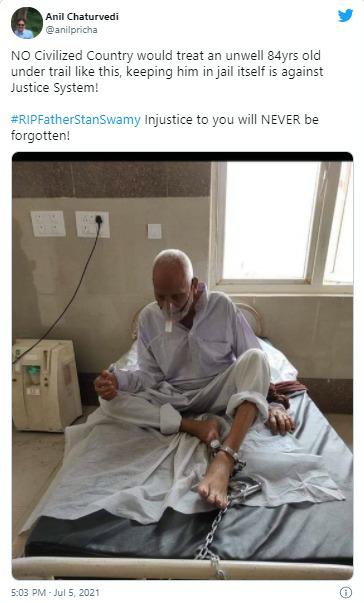 The same post is also widely shared on Facebook. A Facebook page named Ambedkar political party also shares the same image with a claim that "It was shocking that Mr.Stan Swamy Human Rights activist had been treated badly and died in hospital whereas Rapists, Murderers have been MLAs MPs in BJP led government." 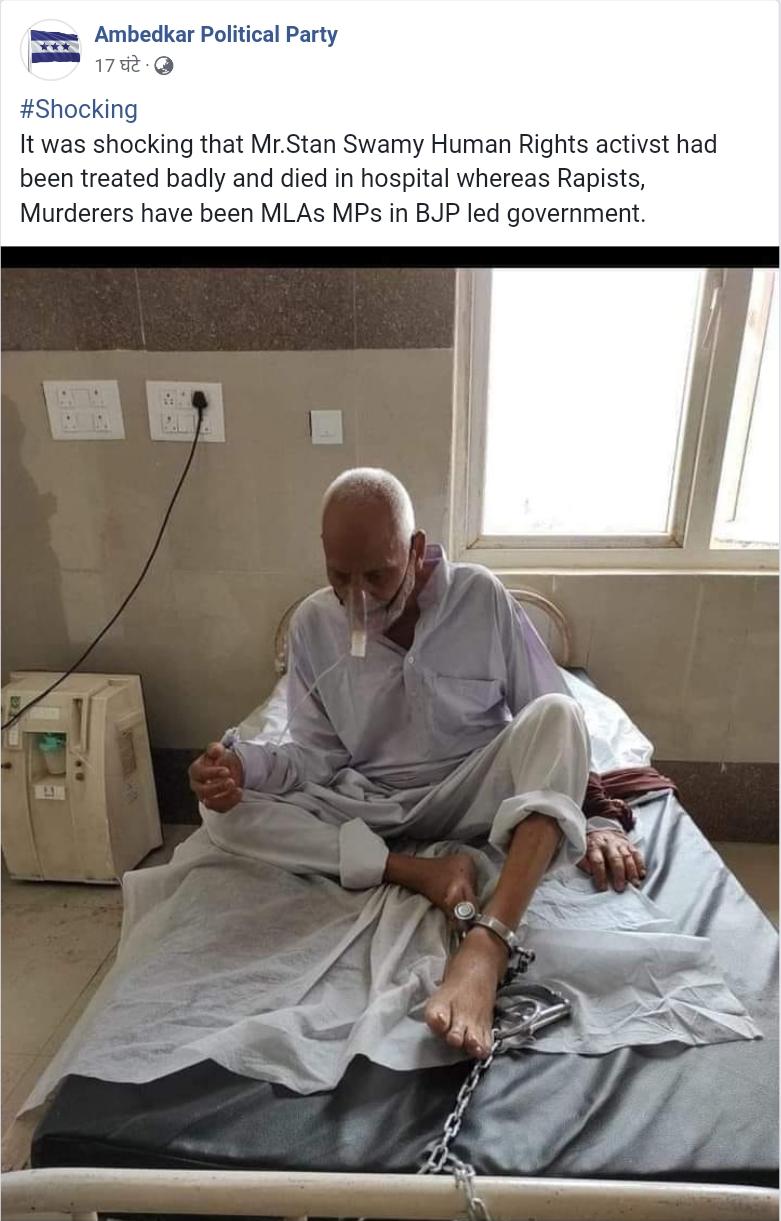 In our investigation, we found that the viral image is misleading. The image is of Baburam Balwan Singh (92), a convicted murderer.

After doing a reverse image search on google, we found that the same image was carried by several media reports in May 2021. According to a report, the man seen in the image is 92-year-old Baburam Balwan Singh, a convicted murderer who was lodged at the district jail of Etah, Uttar Pradesh. He was taken to a hospital in May 2021 due to breathing problems. 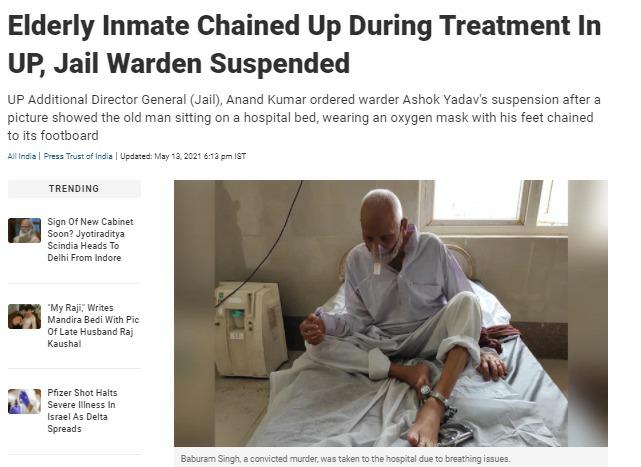 As per the report of The Times of India, Balwan Singh, who was brought to Etah jail on February 6, 2021, after being convicted in the murder case, is a resident of the district’s Kulla Habibpur village. After the image of the man went viral, UP Additional Director General (Jail), Anand Kumar ordered warder Ashok Yadav's suspension and sought clarification from his supervisory officer.

According to the report of, Punjab Kesari, the officer said that the security personnel on duty with the prisoner in the hospital handcuffed the elderly man's legs to the bed. Doctor Saurabh, who was on duty in the hospital, told that Baburam is suffering from some mental problem and used to repeatedly run away from the bed. That's why was tied to the bed so that they do not get hurt.

Who was Father Stan Swamy?

Stan Swamy was an Indian Roman Catholic priest, a member of the Jesuit order, and a tribal rights activist. On 8 October 2020, Swamy was arrested and chargesheeted by the National Investigation Agency under the Unlawful Activities (Prevention) Act for his alleged role in the 2018 Bhima Koregaon violence and links to the Communist Party of India (Maoist).

In May, Swamy’s health had deteriorated, leading to civil society groups urging the authorities to bring him immediate medical attention. Following this, he was hospitalized. He had tested positive for COVID-19 during hospitalization.

As his health deteriorated, 84-year-old Swamy was reportedly placed on ventilator support at Mumbai’s Holy Family Hospital on Sunday, 4 July. Stan Swamy died of cardiac arrest on Monday, 5 July, a day before his bail hearing in the Bombay High Court.

In Conclusion, the man in the viral image is not Father Stan Swamy but Baburam Balwan Singh, a convicted murderer, who was admitted at a government hospital in Uttar Pradesh's Etah.