A cropped version of the video of Prime Minister Narendra Modi addressing a public meeting in Siliguri on April 10 during the campaign for Bengal Assembly elections is being shared on social media, which is out of context and misleading.

A video clip on Prime Minister Narendra Modi is being circulated on social media, in which he can be heard speaking in the context of theft. It is being claimed that Modi made a statement about his childhood and calling himself a "thief".

In the video clip, PM Modi can be heard saying, “When I was a child I used to steal, at that time if my mother had stopped, I would not have become such a robber.”

A Facebook user name Sawan Rathor share a video with a claim that "When I was a child I used to steal, at that time if my mother had stopped, I would not have become such a robber". 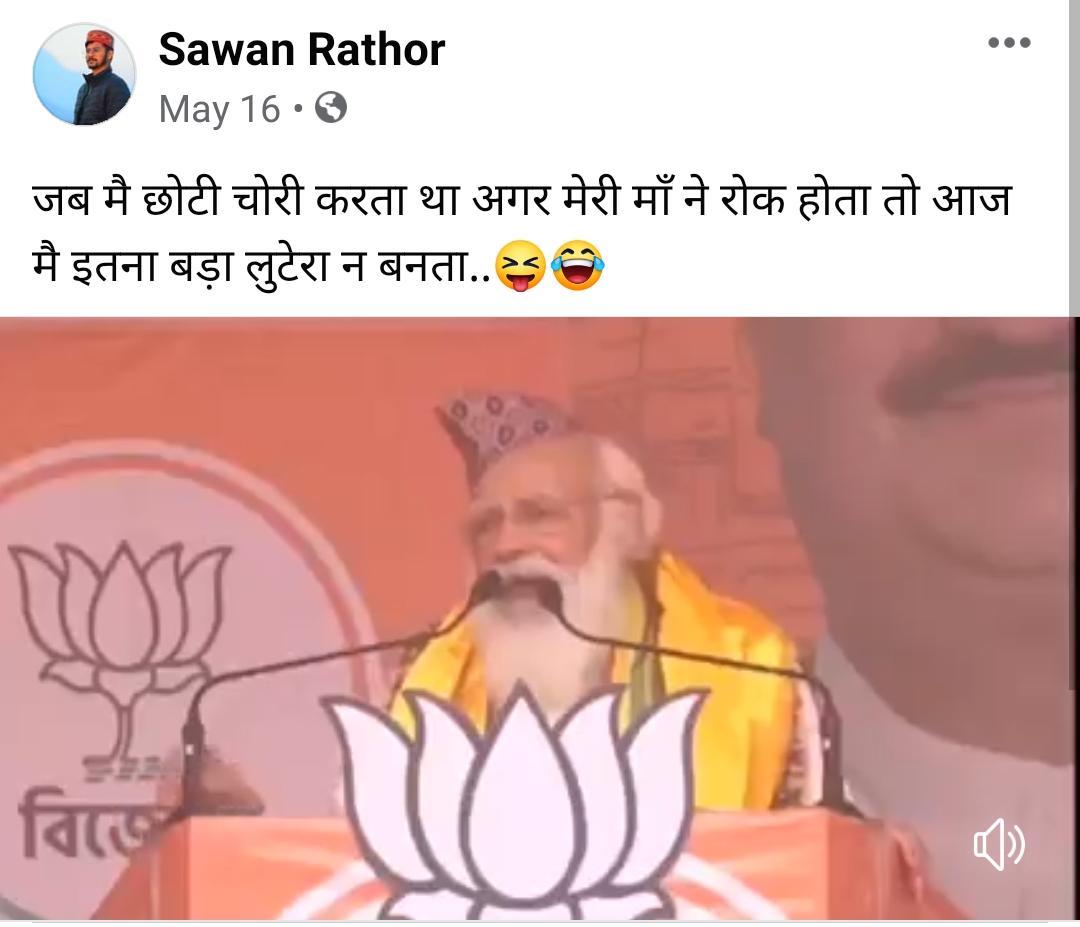 The viral video received 1,000 likes and 10,800 views at the time of writing this article.

In our investigation, we found that the viral video is misleading. This video is the cropped version of the public meeting of PM Modi during the campaign for the Bengal Assembly elections.

After doing a reverse image search of the keyframes on google, we found the full version of the viral video on the official YouTube channel of Prime Minister Narendra Modi, a part of which is being cut off and was taken out of context. The title of the video read, ‘PM Modi addresses public meeting at Siliguri, West Bengal’.

The viral part of the video comes at 39:35 minutes onwards, Modi says, "Brothers and sisters, when we were little, we all heard a story about the notorious robber who was sentenced to death. When he was sentenced to death, he was asked what is your last wish? So he said that I have to meet my mother. Then the government arranged that he should be introduced to his mother. When he met his mother, he snapped and cut off his mother's nose. When people asked him why did you cut off his mother's nose, he replied that when he was a child he used to steal, at that time if his mother had stopped, he would not have become such a robber.”

His same speech is being deliberately taken out of context and shared with the fake propaganda saying that the Prime Minister called himself a thief. Whereas during the election meeting held on April 10 in Siliguri, Bengal, he made this statement while targeting Mamta Banerjee.

In conclusion, a cropped version of the video of Prime Minister Narendra Modi addressing a public meeting in Siliguri on April 10 during the campaign for Bengal Assembly elections is being shared on social media, which is out of context and misleading.