As India reels under the second wave of Covid-19, several false claims and myths have been going viral on the internet. Recently, a post is getting viral on social media regarding the composition of the Covaxin vaccine where it has been suggested that Bharat Biotech's Covaxin vaccine contains the newborn calf serum.

The national coordinator of Digital Communications and Social Media at Congress Gaurav Pandhi tweeted the screengrab of RTI response. According to the viral screengrab, "newborn calf serum is used in revival process of Vero cells which is used for the production of coronavirus during the manufacturing of Covaxin bulk vaccine".

Taking to Twitter, Pandhi cited an RTI response as claiming that the Narendra Modi government admitted that the vaccine manufactured by Bharat Biotech “consists Newborn Calf Serum .....which is a portion of clotted blood obtained from less than 20 days young cow-calves, after slaughtering them”. “THIS IS HEINOUS! This information should have been made public before,”.

In another tweet, he shared a research document that gave details on how calf serum is obtained. 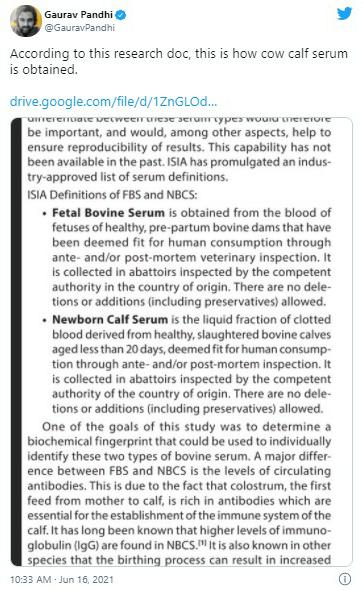 A Twitter user name Cowsblike also shares the same post with a claim that "FINALLY Govt. accepts that New Born Calf serum is used in COVAXIN. . This Information Was Received By Vikas Patni After Filing RTI." 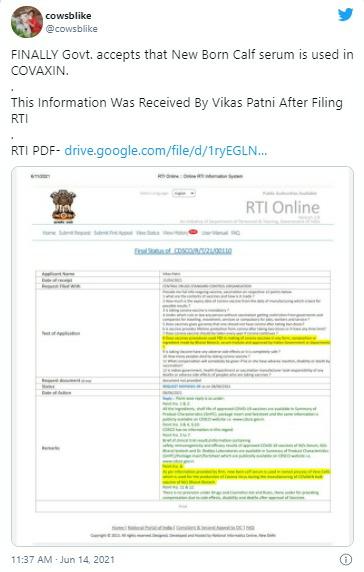 The viral post received likes 2,700 and 1,700 retweets at the time of writing this article

In our investigation, we found that the viral claim is misleading. The Union health ministry and Bharat Biotech refuted the viral claim that the Covaxin vaccine contains the newborn calf serum.

Replying to Gaurav Pandhi's tweet, JNU professor Anand Ranganathan, wrote on Twitter, "Pl delete this tweet. 1. COVAXIN is the vaccine - it does NOT contain Calf serum as you allege. 2. Calves are NOT slaughtered for it. 3. Calf serum is used ONLY for growing cells to make more of the virus. 4. This information is ALREADY in the public domain since September 2020." 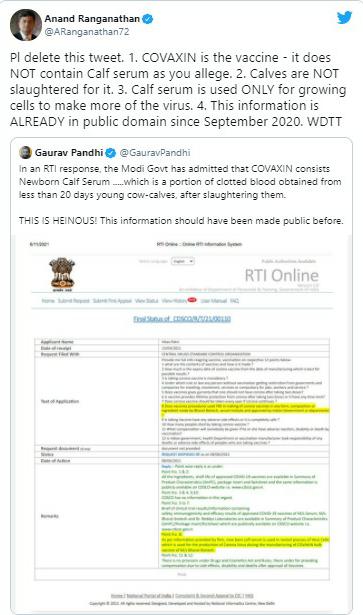 Government statement regarding the viral claim 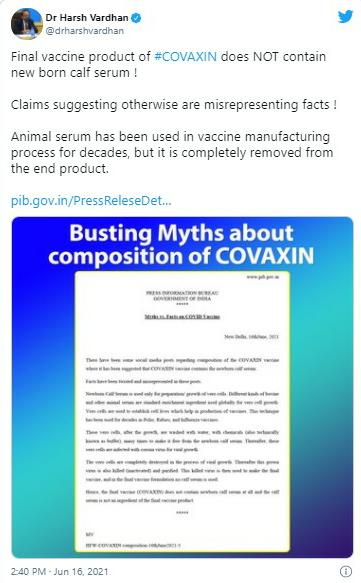 There have been some social media posts regarding the composition of the Covaxin vaccine where it has been suggested that it contains the newborn calf serum, the government said.

"Facts have been twisted and misrepresented in these posts. Newborn calf serum is used only for the preparation/growth of Vero cells. Different kinds of bovine and other animal serum are standard enrichment ingredients used globally for Vero cell growth. Vero cells are used to establish cell lives which help in the production of vaccines. This technique has been used for decades in Polio, Rabies, and Influenza vaccines," the Centre's statement added.

The government added, "These Vero cells, after the growth, are washed with water, chemicals (also technically known as buffer), many a times to make it free from the newborn calf serum. Thereafter, these Vero cells are infected with coronavirus for viral growth."

The Vero cells are completely destroyed in the process of viral growth, the Centre said, and added, "Thereafter this grown virus is also killed (inactivated) and purified. This killed virus is then used to make the final vaccine, and in the final vaccine formulation, no calf serum is used.

What has Bharat Biotech said about the claims?

Manufacturer Bharat Biotech also issued a statement stating, “Newborn calf serum is used in the manufacturing of viral vaccines. It is used for the growth of cells, but neither used in the growth of the SARS CoV2 virus nor in the final formulation. COVAXIN®? is highly purified to contain only the inactivated virus components by removing all other impurities."

"Bovine serum is widely used in the manufacture of vaccines globally for several decades. The usage of newborn calf serum was transparently documented since the last 9 months," it clarified. 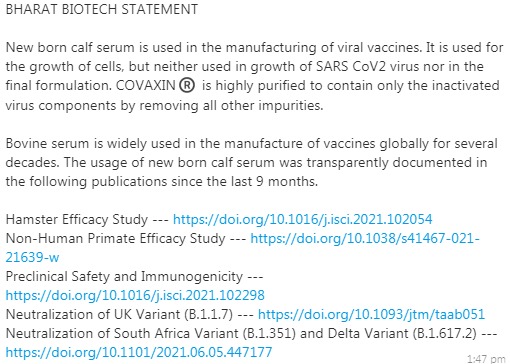 What are the ingredients in the COVAXIN?