The claims made in the viral video that a nebulizer machine can work as an alternative to an oxygen cylinder is false.

As India continues its fight against the COVID-19 pandemic, a video has surfaced on social media platforms in which a young healthcare worker claims that a nebulizer machine can work as an alternative to an oxygen cylinder.

A Twitter user shared the video with a caption in Hindi that can be roughly translated to, "He is Dr. Alok from Sarvodaya Hospital, Faridabad. He has advised a great technique for improving the level of blood oxygen by using a nebulizer. In today’s scenario of an oxygen crisis, this technique can save a lot of lives. Everybody should see this video at least once." 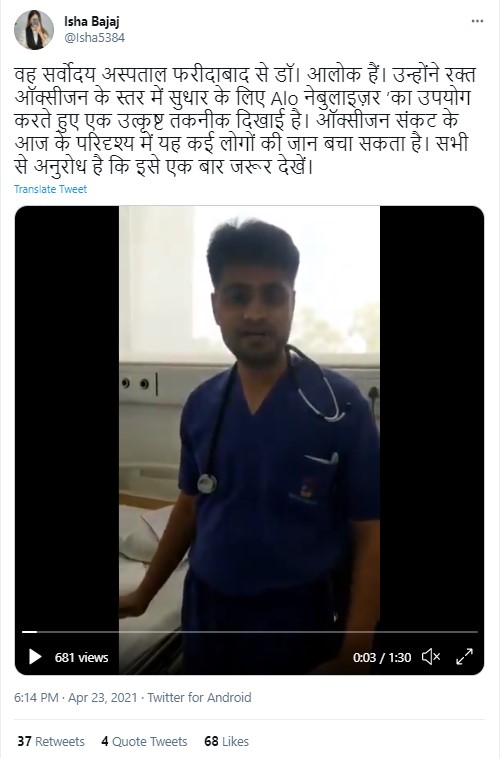 In the video, a person who identifies himself as Dr. Alok of Faridabad's Sarvodaya Hospital shows how a nebulizer could be used instead of an oxygen cylinder. He further advises the use of the nebulizer instead of running after oxygen, in the wake of soaring demand for oxygen amid the second wave of the pandemic.

He further advises using a nebulizer without adding any medicines in the medicine receptacle calling it "a trick to get oxygen supply". He says, "once the patient wears the mask, the nebulizer can be switched on and it will take in oxygen from the air and supply it to the patient ensuring that patients and their families do not have to struggle to get oxygen cylinders and concentrators."

However, we found this claim to be false. Nebuliser cannot be an alternative for oxygen machines.

Sarvodaya Hospital itself has dismissed the claim. Taking to its official Facebook page,  the hospital called the claim to be false and had warned against it. The post said, "The video has not been backed by any evidence or scientific study, does not reflect any medical advice and is in no way endorsed by Sarvodaya Hospital, Faridabad." 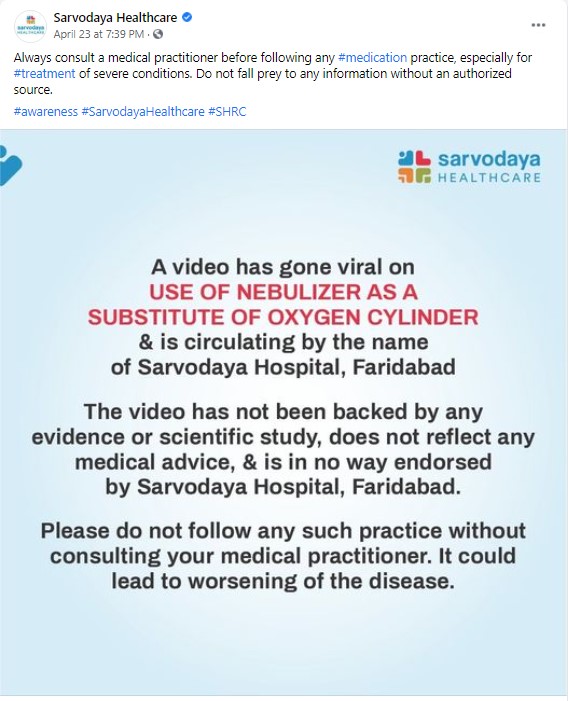 India Today spoke to Dr. Arvinder Singh Soin, surgeon and Group chairman at Medanta Hospital, who dismissed the claim saying, "Baseless. It should be discredited."

The article further quotes Dr. Dhiren Gupta, co-director of Pediatric Critical Care Unit at Sir Ganga Ram Hospital saying, “This is completely a sham. He should give up his medical degree.”

Hence, the claim made in the viral video that a nebulizer machine can work as an alternative to an oxygen cylinder is false.

What is a Nebulizer?

A Nebulizer is a device that creates a fine mist from a liquid, usually using compressed air or oxygen or via ultrasonic vibration. A nebulizer is different from a vaporizer which uses heat to produce mist. Nebulizers are often used to deliver life-saving drugs.