The Wire withdraws a news report claiming Union Minister Rajnath Singh had prescribed people to recite the Hindu epic poem ‘Ramcharitmanas’ to fight the COVID-19 pandemic and also issued an apology for ‘erroneously reproducing' what two other newspapers reported.

Recently, an article was published by the news website 'The Wire' in which it was claimed that Union Defence Minister Rajnath Singh had prescribed people to recite the Hindu epic poem ‘Ramcharitmanas’ to fight the COVID-19 pandemic.

In its article, The Wire stated, “Addressing a Ram Navami function in Lucknow via a video conference, the defense minister said that the recitation of ‘Ramcharitmanas’, an epic poem composed by Tulsidas, has the propensity to cure COVID-19 by enhancing positivity in an individual. Singh went on to add, ‘Rest assured this can work as a medicine in major diseases.”

The article further added, “Interestingly, what came as a prompt booster to the defense minister’s idea was the loud support by folk singer Malini Awasthi, who was the star artist at the Ram Navami event. ‘Reciting ‘Ramcharitmanas’ will help in combating all the negative news being spread about the pandemic; it will also deviate our attention from COVID-19′, echoed Malini, who is married to UP’s additional chief secretary (home) Avanish Awasthi.”

A copy of The Wire's original can be accessed at Dailyhunt.

The website has now withdrawn its story and also issued an apology on Twitter. In its tweet, The Wire wrote, "A story posted on our website today wrongly claimed Defence Minister Rajnath Singh had said the Ramcharitmanas would help the fight against COVID-19. The story was based on unverified reports from other news sources and has been withdrawn." 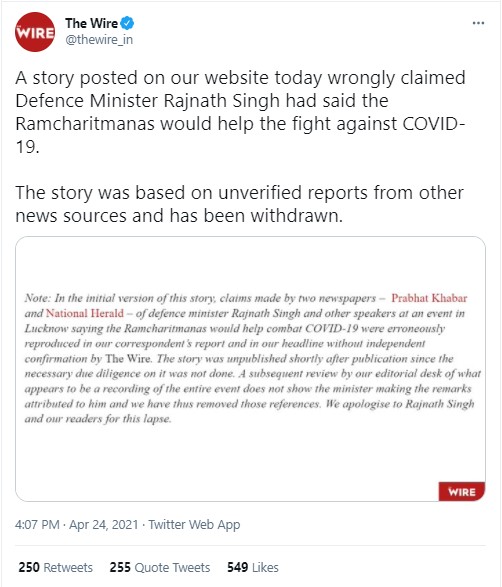 The Wire named Prabhat Khabar and National Herald for misquoting Rajnath Singh and further stated that the quotes were ‘erroneously reproduced’ in the report and the headline by a correspondent without independent confirmation.

The note issued by the publication reads, “The story was unpublished shortly after publication since the necessary due diligence on it was not done. A subsequent review by our editorial desk of what appears to be a recording of the entire event does not show the minister making the remarks attributed to him and we have thus removed those references. We apologize to Rajnath Singh and our readers for this lapse.”

The article has now been updated.

In conclusion, The Wire withdraws a news report claiming Union Minister Rajnath Singh had prescribed people to recite the Hindu epic poem ‘Ramcharitmanas’ to fight the COVID-19 pandemic and also issued an apology for ‘erroneously reproducing' what two other newspapers reported.