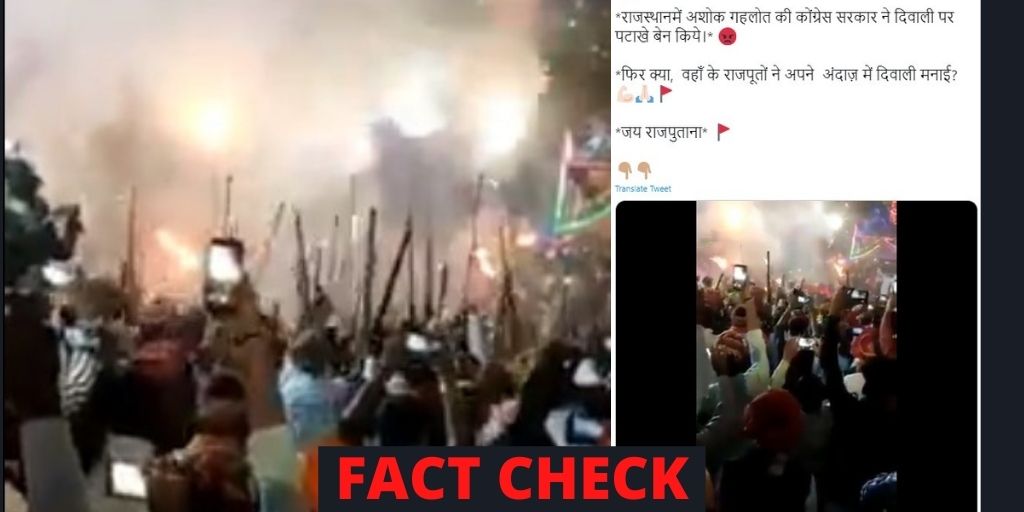 An unrelated video showing celebration of 'Jamra Beej' was being shared with false claims that it shows men from the Rajput community in Rajasthan celebrating Diwali by opening celebratory fire amid firecrackers in the state.

Ahead of Diwali this year, many states in the country including Rajasthan put a ban on the sale of firecrackers due to increasing pollution amid the Coronavirus pandemic. In Rajasthan, the Ashok Gehlot government has imposed a fine of Rs 10,000 on those selling firecrackers and Rs 2000 on those who burn them. Amid this, a video is being widely shared on social media platforms showing a huge crowd in which some men opened celebratory fire while other people record video of it.

The video is being shared with the claim that it shows men from the Rajput community in Rajasthan who celebrated Diwali in their style after the Gehlot government banned firecrackers.

A Twitter user named Akash shared the video with a caption in Hindi that can be roughly translated to, "Ashok Gehlot's Congress government in Rajasthan banned firecrackers on Diwali. So Rajputs celebrated Diwali in their own way. Jai Rajputana." 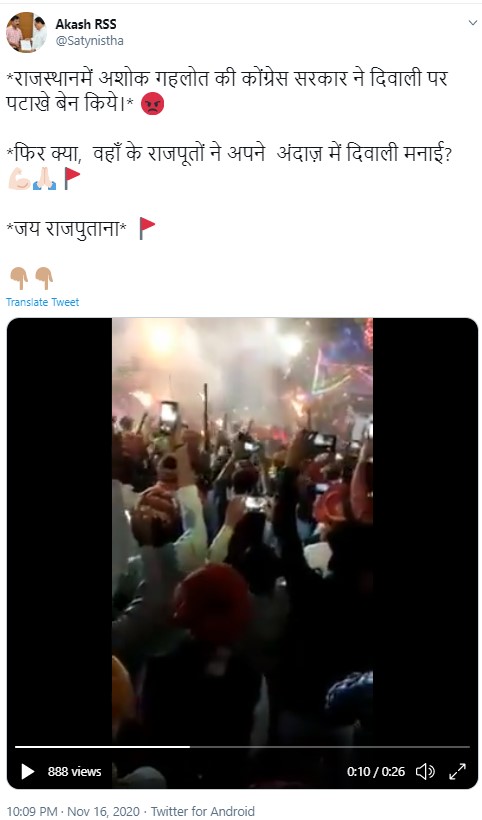 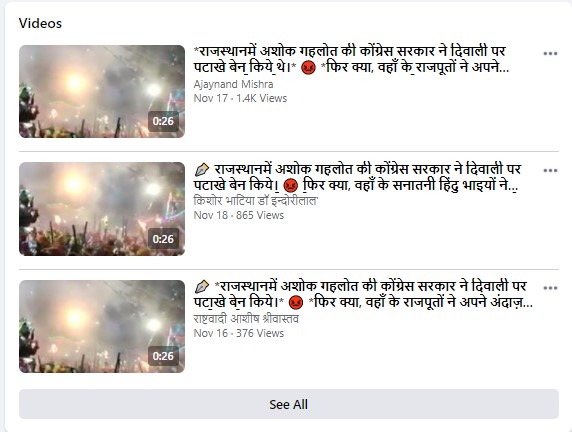 In our investigation, we found this claim to be false. The video actually shows an old tradition of celebrating Holi in a different style called 'Jamra Beej' in a village near Udaipur city named Menar.

With the help of reverse image search using the keyframes of the video, we found this video uploaded on a YouTube channel on March 12, 2020, with the title, "Jamrabij menar menaria 2020."

This video was also shared on a Facebook page in March 2020 with the caption, "Glimpses of Menar Jamrabieejfestival 2020."

According to a Times of India report, the Jamra Beej festival is a 400-year old tradition of this village inhabited by Menaria Brahmins thus giving the village its name. Menar is known for its Holi rituals around this time of the year where the Brahmins play ‘Baroodon-ki-Holi’ to mark their victory over the Mughal army centuries ago. Rana Udai Singh fought against the Mughals and Menaria Brahmins took up guns and swords to help the king. They captured the Mughal booth and defeated the enemy. The day fell on Jamra Beej which is celebrated till today by the locals to cherish the valour and heroism of their ancestors.

In conclusion, an unrelated video showing celebration of 'Jamra Beej' was being shared with false claims that it shows men from the Rajput community in Rajasthan celebrating Diwali by opening celebratory fire amid firecrackers in the state.