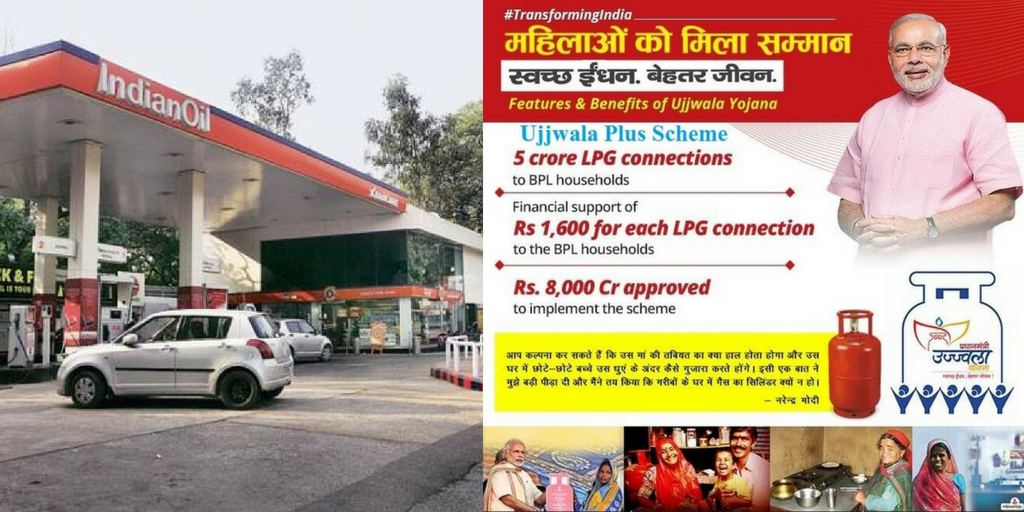 Several independent sources have denied the allegations. S.S Gogi who was quoted by The Hindu is a congressman. Hence, the claim of threatening to block the supply of fuel to those pumps who refuse to display the image of the Prime Minister seems false.

The report has quoted the president of Consortium of Indian Petroleum Dealers (CIPD), S.S. Gogi: “They are asking us to display the picture of Prime Minister Narendra Modi in retail outlets and those who refuse are threatened with blocking of supplies”.

The report has been picked by many other media outlet and many users on Twitter has used it to troll the Indian Government. Sanjiv Bhatt, who has been caught spreading fake news several times twitted "No Oil Supply to Petrol Pumps That Do Not Display Pictures Of Prime Minister Narendra Modi." 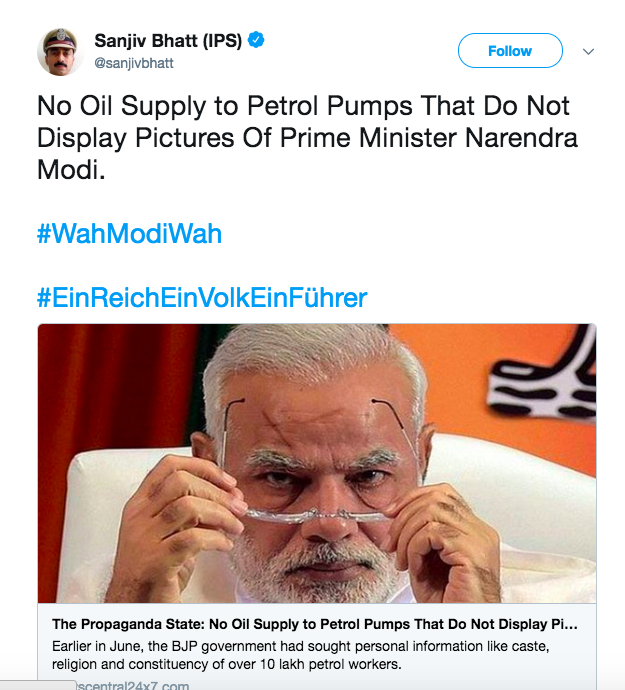 A senior official of the Indian Oil Corporation Ltd (IOC) has denied the allegation. While speaking to The Print he said "No, OMC hasn't threatened to choke supply as the dealers are alleging. Also, the fact that many are saying that the petrol pumps are being used to promote Prime Minister Narendra Modi’s photographs is incorrect. What we are doing is promoting the schemes. Now many of the schemes have been initiated by this government and therefore have his photograph. So, while promoting the schemes, his photograph automatically comes up. There is nothing more to it".

To verify the claim we spoke to the manager of three petrol pumps in Bangalore (HSR Layout, BTM Layout, Bannerghatta). All of them have denied the allegation.

Even on social media, many people have asked their friends who run petrol pumps. Till now we haven't received any confirmation apart from the statement of S.S. Gogi.

A Twitter user also confirmed it with his friend. 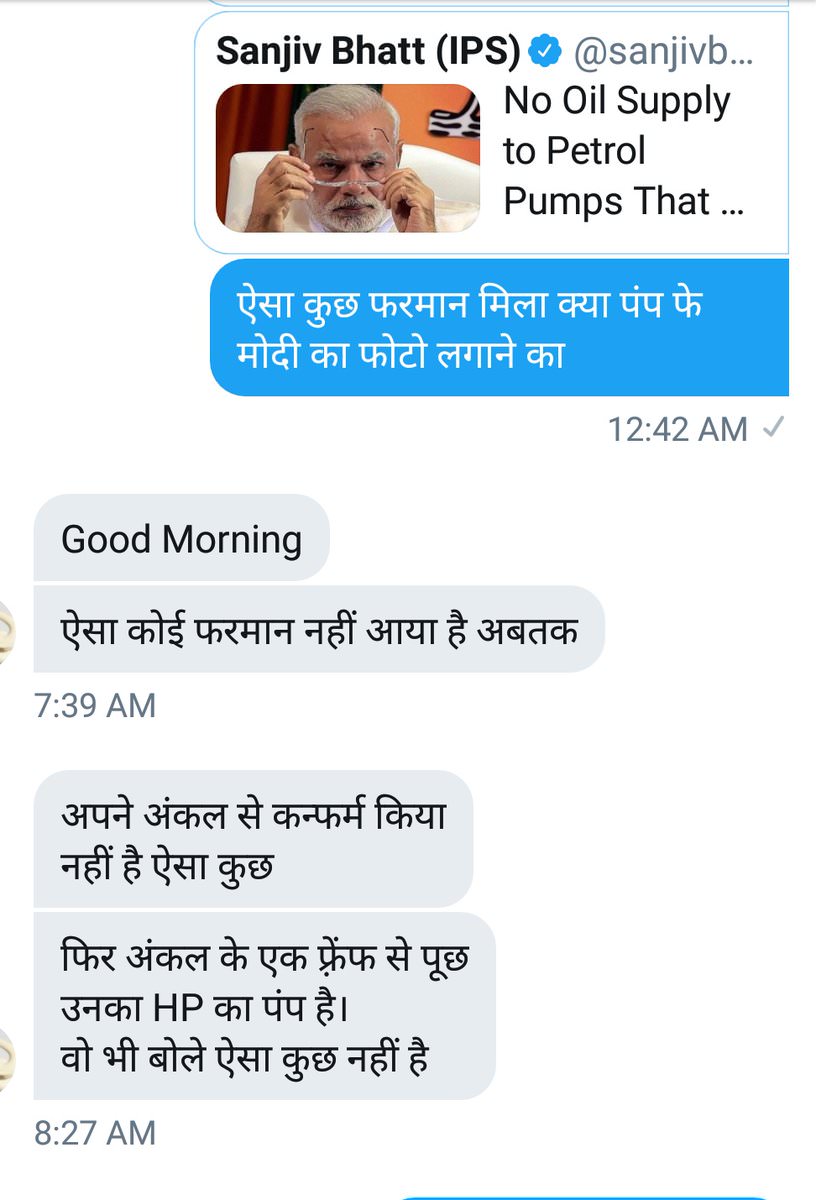 We found a twitter profile of S.S Gogi who is the general secretary of Haryana Pradesh Congress. We can't confirm whether he is the same S.S Gogi who was quoted by The Hindu. But we found that he has twitted the paper clip of The Hindu in which he name was mentioned. This gives us the hint that he is the same person. 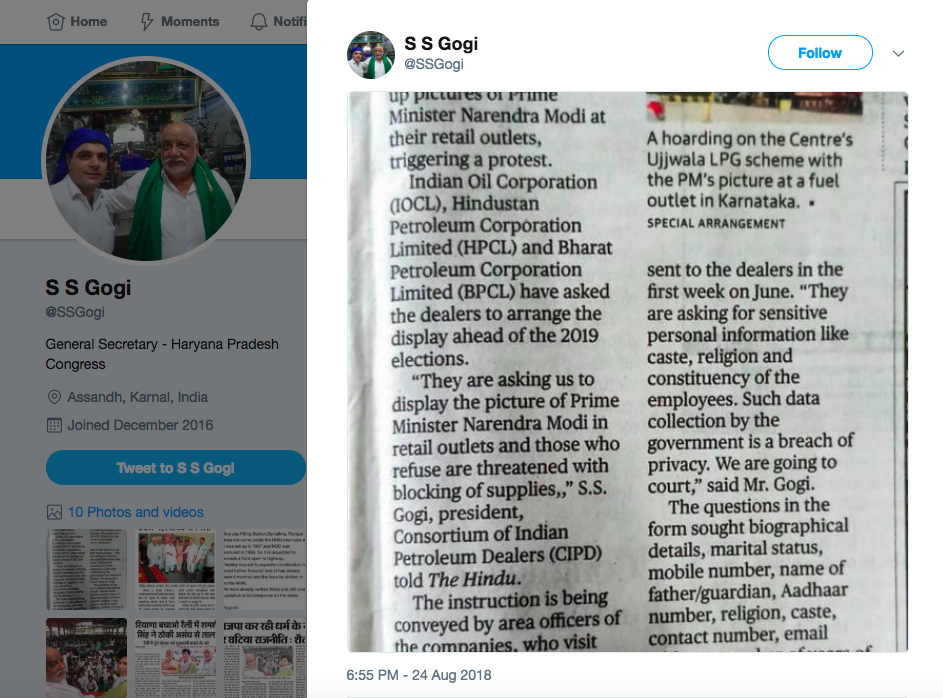 Credit for discovering this profile goes to OpIndia. The source cited by The Hindu is affiliated to Congress and it's very much possible that there is some ulterior motive behind this statement.

The claim of threatening to block the supply of fuel to those pumps who refuse to display image of the Prime Minister seems false. Selling petroleum products is the business of the OMCs, and it is unlikely that they would stop the supply of petroleum products to retail outlets for such a trivial reason. It is also worthy to note, that petrol pumps running dry would cause far greater damage to any government in power compared to the PM’s photograph not being displayed. Hence, it seems impossible for any government to issue such a self-defeating order.