The viral Image showing farmers' protest in Haryana, against three agriculture ordinances passed by the Central government, is an old image from Rajasthan. The picture has nothing to do with ongoing protest in Harayana.

Recently, on 10 September 2020, Bhartiya Kisan Union (BKU) and other farmer organizations blocked the national highway 44 at Pipli in Haryana’s Kurukshetra district for almost two hours after police did not allow them to move to their rally venue to protest against the Centre’s three agriculture ordinances.

Amid this, a picture of a huge crowd is getting viral on social media with the claim that it is from the recent farmer's protest in Haryana.  A Twitter user name Anika Aren tweeted an image with a caption, "Many farmers were beaten up, arrested. Many suffered head injuries. We will tolerate all of this. What we won't tolerate is an attack on our country's farms, diversity, and the price of our crops.” (translated from Hindi) 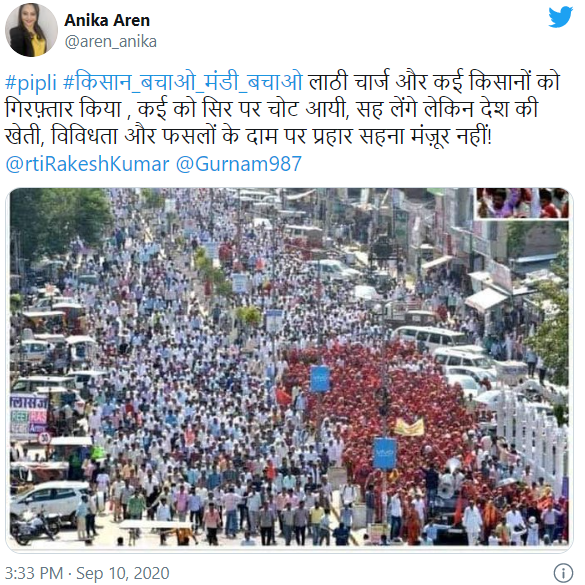 The same picture is also getting viral on Facebook as well. A user name Amit Singh shared the image with a claim that "Nothing major then Kangana. Just a bunch of farmers protesting for their rights not too far from the national capital. How many of you saw them on your TV Screens? " 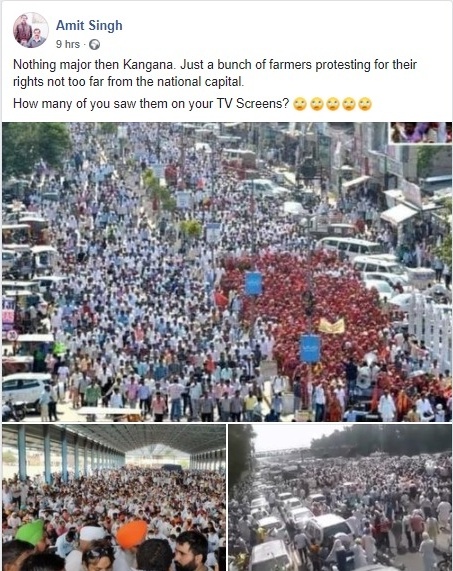 In our investigation, we found that the viral claim is false. The viral image is from the 2017 protest rally held by more than 15,000 farmers in Rajasthan.

After doing a reverse image search on google, we found a news article by Jaipur-based Hindi news portal Patrika which carried the same viral image. According to the article published on 4 September 2017,  the image was part of a historic protest held by more than 15,000 farmers against the Government. Thousands of farmers came out on the streets, demanding a full loan waiver and other demands, including providing fair prices to the crops. Farmers took out a funeral procession of the Chief Minister's effigy throughout the city. 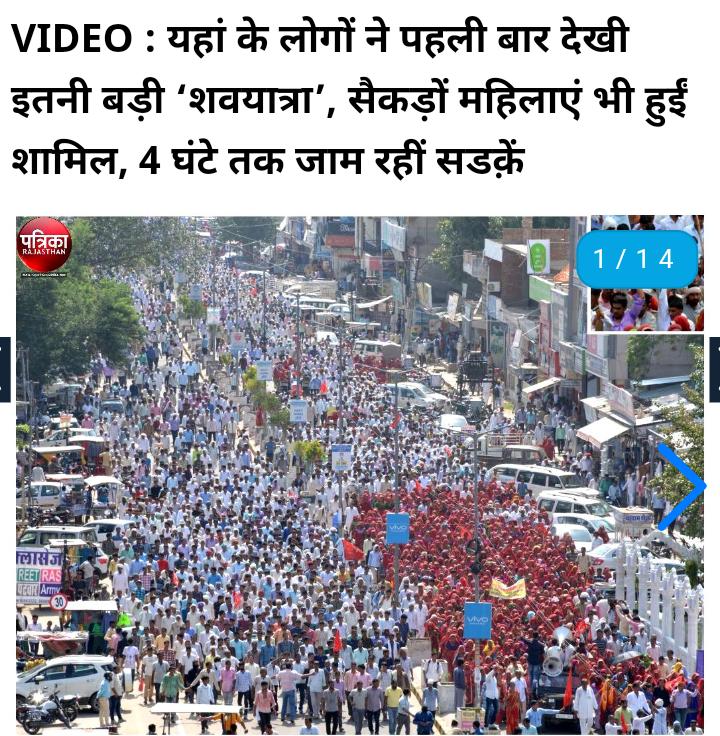 Demanding the implementation of the Swaminathan Committee's recommendations, crop loan waiver, and removing the restriction on cattle trade, farmers in Rajasthan’s Sikar had blocked entry and exit paths to three districts, forcing the state government to ban internet services and impose the Section 144 in the district.

We also found a video on the official YouTube channel of  NewsClickin published on 12 September 2017 in which the same visuals can be seen. The caption reads, "Glimpses of the Farmers' Movement, Sikar, Rajasthan".

According to a report, the farmers had 11 demands, including crop loan waiver, purchase of crops at minimum support price (MSP), increasing farmers’ pension from Rs500 to Rs5,000, tackling the menace of stray cattle, removing the ban on the sale of cattle imposed by the state government and implementation of the Swaminathan Commission recommendations.

In Conclusion, the viral Image showing farmers' protest in Haryana, against three agriculture ordinances passed by the Central government, is an old image from Rajasthan. The picture has nothing to do with ongoing protest in Harayana.