Students of classes 9 to 12 will be allowed to visit schools outside Containment Zones on a voluntary basis with parents’ written consent, for taking guidance from their teachers.

A message is getting viral on WhatsApp claiming that the education minister of the country has decided to open schools and colleges in a phased manner from September 21. 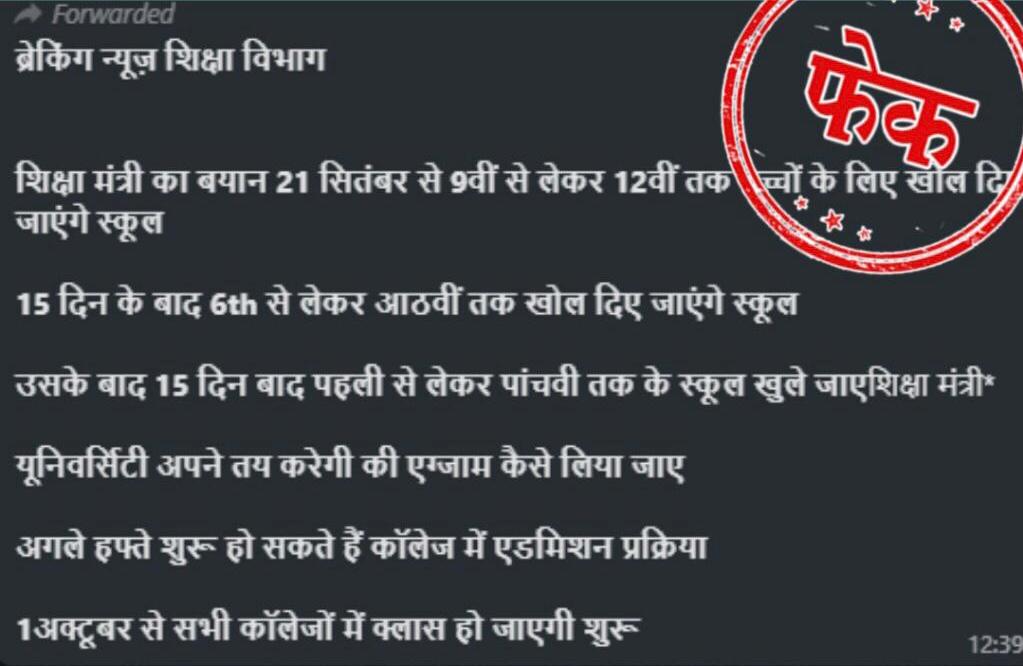 This news, however, is fake and misleading.

Dismissing all these claims, the Fact Check Unit of the Press Information Bureau (PIB) has clarified that the Education Minister had not made any such announcement and the message is fake.

The tweet reads "Claim: In the viral WhatsApp Forward, it is being claimed that the Education Minister has decided to open School in a phased manner from September 21. #PIBfactcheck:- The Minister of Education has not made any such statement. According to Unlock4 guidelines students of the class, 9th-12th can go to school to consult teachers. 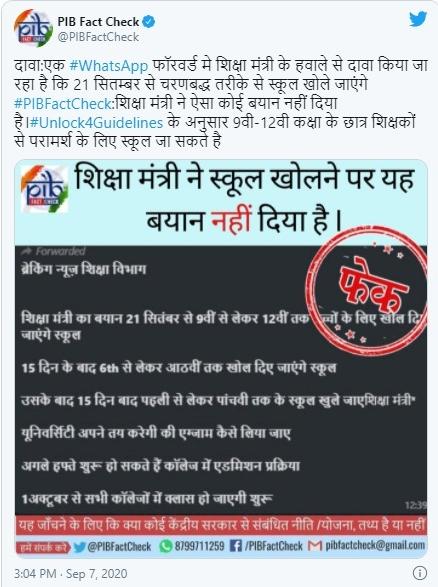 On August 30, the Ministry of Home Affairs had said that schools and colleges across the country shall remain closed until September 30. "After extensive consultations with all the states and UTs, it has been decided that schools, colleges, educational and coaching institutions will continue to remain closed for students and regular class activity up to 30th September 2020.
Students of classes 9 to 12 may be allowed to visit schools outside Containment Zones on a voluntary basis with parents’ written consent, for taking guidance from their teachers.

The MHA added that online and distance learning will be permitted, with up to 50% of teaching and non- teaching staff to be called to the schools at a time for online teaching/ Tele- counseling related work in areas outside containment zones only with effect from 21st September 2020 for which SOP will be issued by Ministry of Health and Family Welfare,”.

In conclusion, the viral claim is false that the education minister has decided to open schools and colleges in a phased manner from September 21. We found that the Education Minister had not made any such announcement and the message is fake.