The viral claim that Doctors in Kota, Rajasthan stole the kidneys of a patient during the time of the pandemic is false. The video is from 2018  when the family of the deceased accuses the hospital of 'stealing' kidney from a dead body. It has no relation to the ongoing coronavirus pandemic.

A video is getting viral on social media which shows a man's body lying on a hospital bed with a bandage on his lower abdomen. It is claimed that the incident is of Sudha Hospital in Kota, Rajasthan, where doctors first declared the victim COVID positive and then stole his kidneys.

A Facebook user name Local Videos shared the video with a claim that "This video is from Kota district, Sudha Hospital in Rajasthan where the doctors declared this person as COVID positive and then stole his kidneys. The person has made a clear video, and all the brothers are requested to share this video as much as possible so that the doctor who is doing such action should be punished. "{Translated from Hindi}

The person who made this video can be heard shouting at the hospital staff. "Don't try to fool me. You have removed the kidney. Why is the bandage tied? He had a head injury, but his stomach was completely fine. You made a cut in his abdomen to steal his kidneys. I will give this video to the media so that your Sudha Hospital explodes. "

The same video is also getting viral on Twitter with the same claim. 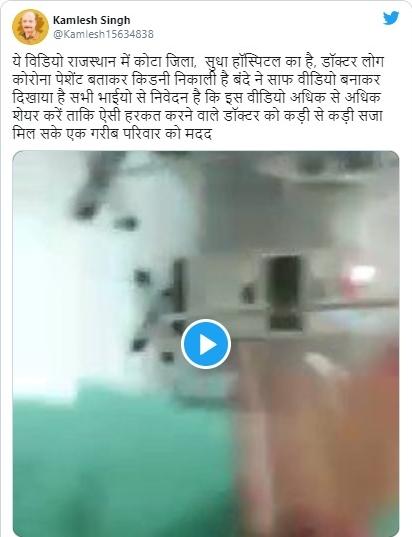 In our investigation, we found that the viral claim is false. The video is from 2018 has no relation to the ongoing coronavirus pandemic.

After doing reverse image research on google using keyframes we found, that the video was shared by a Youtube channel name INDIA NEWZ on 6 November 2018.

According to the caption," Babulal Verma, the resident of Kota's Kapishthan Colony, was admitted to Sudha Hospital due to injury in his head after he met with a road accident. The patient died during treatment in the hospital. After that, the family made serious allegations on hospital authorities of stealing the kidney of the deceased".

We also found a news report of 'Rajasthan Patrika' published on 4 November 2018. The report explains the whole incident in detail. According to the report, a person named Babulal was admitted to a hospital in Kota in a critical condition after he met with a road accident. Babulal died during treatment. After the death, Babulal's family accused the hospital of stealing his kidney. However, after conducting a post mortem, the police rejected the claims of the missing kidney.

We found a video of 'India TV', in which the doctor of Sudha Hospital clarified the whole incident. The doctor said, "There was a serious injury to the patient's brain. During the treatment, the doctors removed the brain bone and placed it in his abdominal wall. Later it is put back when the patient is cured. This process is called a decompressive craniectomy. This procedure is often used in cases of severe head injury. "

In conclusion, the viral claim that Doctors in Kota, Rajasthan stole the kidneys of a patient during the time of the pandemic is false. The video is from 2018  when the family of the deceased accuses the hospital of 'stealing' kidney from a dead body. It has no relation to the ongoing coronavirus pandemic.