An old video from 2010 is being shared with a false claim that BJP MLA was thrashed by the public in Haryana.

A video of a group of men thrashing men people is going viral on social media with a claim that the video was from Haryana where people are beating the BJP MLA.

This 90-second-long viral clip is actually a CCTV footage, showing a group of men entering a room where two men are already having a conversation with an officer already seated. The group of men started a thrashing two men sitting in front of the officer as soon as they entered the room. After some time in the video, the officer walks out of the room and the group of men continues to assault.

A Facebook user shared the video of Facebook with a caption in Hindi that can be roughly translated to, "BJP MLA thrashed in Haryana. Now its time for bhakts, people are becoming more aware." 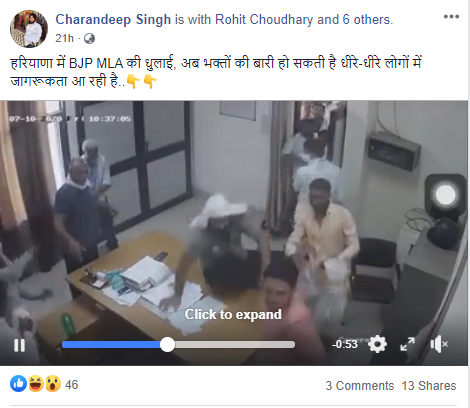 A number of users are sharing the video with the same claim. 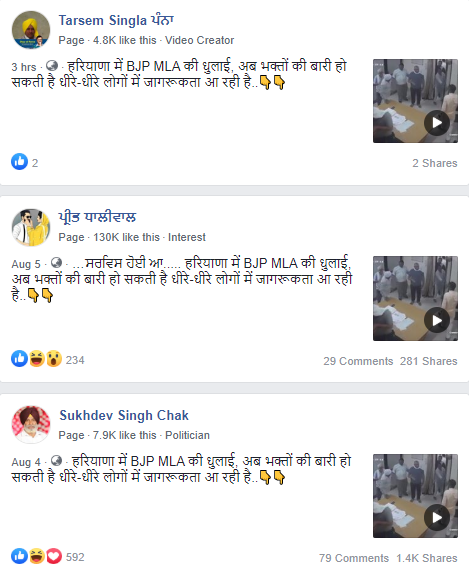 In our investigation we found this claim to be false.

With the help of reverse image search after extracting the keyframes of the video using Invid Tool, we found that this video aired by India Today on YouTube on 23 July 2010.

The title of the video reads, "Police has registered a case against five people for brutally thrashing 2 men at SDO office in Haryana's Munak. The unidentified persons can be seen recklessly beating two men."

According to the report, the incident took place at the office of Sub-Divisional Officer (SDO) in Munak village, Haryana. India TV report also includes a police officer's byte, in which he can be heard saying that the three accused have been arrested. According to him, an FIR has been registered against five people, out of which three have been arrested, and the involvement of two others is being investigated.

In conclusion, an old video from 2010 is being shared with a false claim that BJP MLA was thrashed by public in Haryana.