The incident in the video took place in Hyderabad (Telangana). The boy in the video is Mohammed Imran Khan and he was killed over a family dispute. The accused in the case are Imran’s stepbrother and their associates. There is no communal angle to the incident.

A video is getting viral on social media in which two people can be stabbing a man with a dagger on a crowded street. The video is being shared with a claim that a Hindu boy has been stabbed and killed by Muslims in Andhra Pradesh.

A Facebook page Akhand Bharat shared the video using a caption "Muslim youths in Andhra Pradesh set a precedent of Hindu-Muslim brotherhood and killed a Hindu youth with a knife in broad daylight. This is not the first incident. Such incidents happen with Hindus in this country every day. The Left and Secular Government are unable to provide justice to Hindu victims due to Muslim vote banking. All this is happening not only in Andhra Pradesh, but other states of the country like Kerala, Kashmir, West Bengal, Rajasthan, and most of the states as well. Hindus stuck in their caste show their cowardice by watching this silently. Hindus do not stand on the injustice being done to Hindus. As a result, every Hindu will suffer, the day is not far when the killing of Hindus will happen inside their houses. The desires to become rich has taken Hindus away from his religion and culture".(Roughly translated from Hindi )

In our investigation, we found that the viral claim is false that a Hindu boy was stabbed and killed by Muslims in Andhra Pradesh. The boy in the video is Mohammed Imran Khan and he was killed over a family dispute. There is no communal angle to the incident

After doing a reverse image search of the keyframes, we found a video that was uploaded on 'A18 Telangana News' on June 5, 2020. According to the caption of the video, Imran khan Aged 22 years was murdered by his stepbrother in Yakutpura. The murder was in Full Public view at Zafar Road Yakutpura Under Rein Bazar P.S Limits. 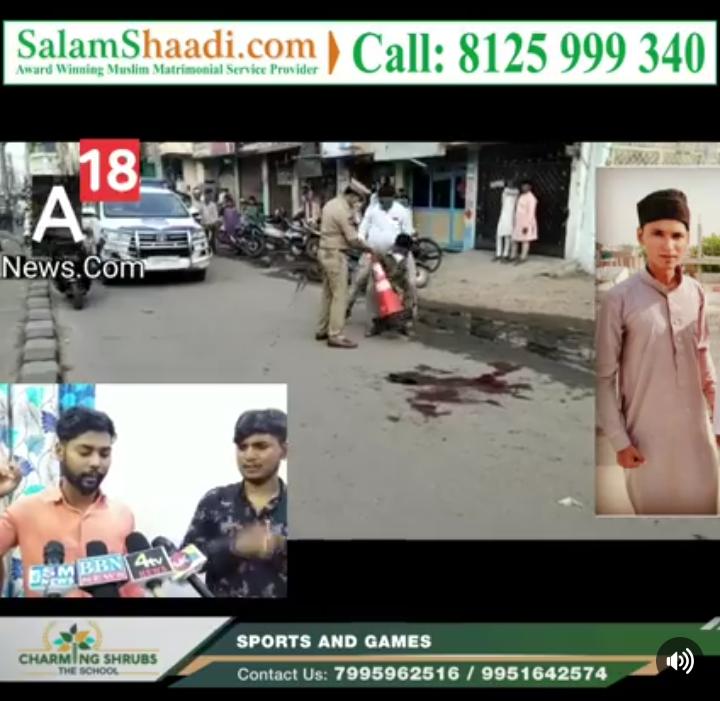 You can see the video here.

We also found a news report of Times of India published on 6 June 2020. A 25 years old man was stabbed to death by his relatives on a Crowded Street at Rein Bazar. Police suspect property dispute to be the reason behind the murder of Mohammed Imran Khan, a student from Chunne ki Bhatti area in Chandra Nagar of Yakhutpura.

According to the news report of Telangana Today four persons, who were allegedly involved in the murder of the man at Rein Bazaar five days ago, were arrested by the Hyderabad Commissioner’s Task Force. The suspects were identified as Mohammed Mehtab Khan, Mohd Taleb Khan, Mohd Arbaz Khan, and Mohammed Amir. One suspect, Mohd Ghouse Khan alias Pasha, is absconding. 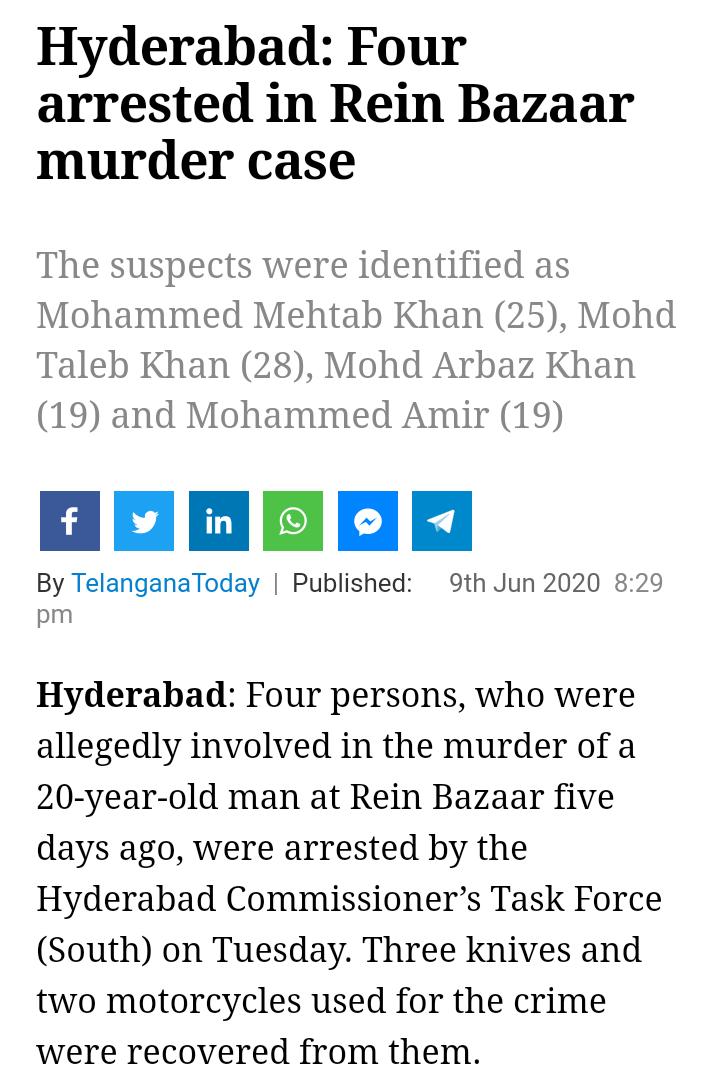 Additional DCP (Task Force) said there were disputes between Habeebunnisa and Ruksana, both wives of Mohd Ghalib Khan who had died a few years ago. After the death of Ghalib Khan, the elder son of Habeebunnisa got a government job on compassionate grounds and she had reportedly retained the property also. Ruksana, the second wife, developed a grudge as she felt that she did not get an equal share in the property of her husband or other benefits. Therefore, Ruksana’s sons, Taleb, Ghouse, and Mehtab, planned to kill Imran, Habeebunnisa’s son.

In conclusion, there is no communal angle in the case. The boy in this video is not a Hindu and the incident happened in Hyderabad (Telangana). He was killed by his own Stepbrother and their associates over a family dispute. Both the accused and the deceased involved in the incident belong to the same community.