Posts on social media platforms with claims about the launch, speed, and warranty about Tata EVision Electric Car are fake.

Recently, a claim with an image is doing rounds on social media that a new Electric Car from Tata Motors, Tata EVision can Run 1000 Kilometers in one charge. They claim it is a World Record car coming with a battery warranty for 10 years.

A Facebook page named Swadeshi Being shared the image with the same message written on it with a caption, "TATA PRIDE OF INDIA". 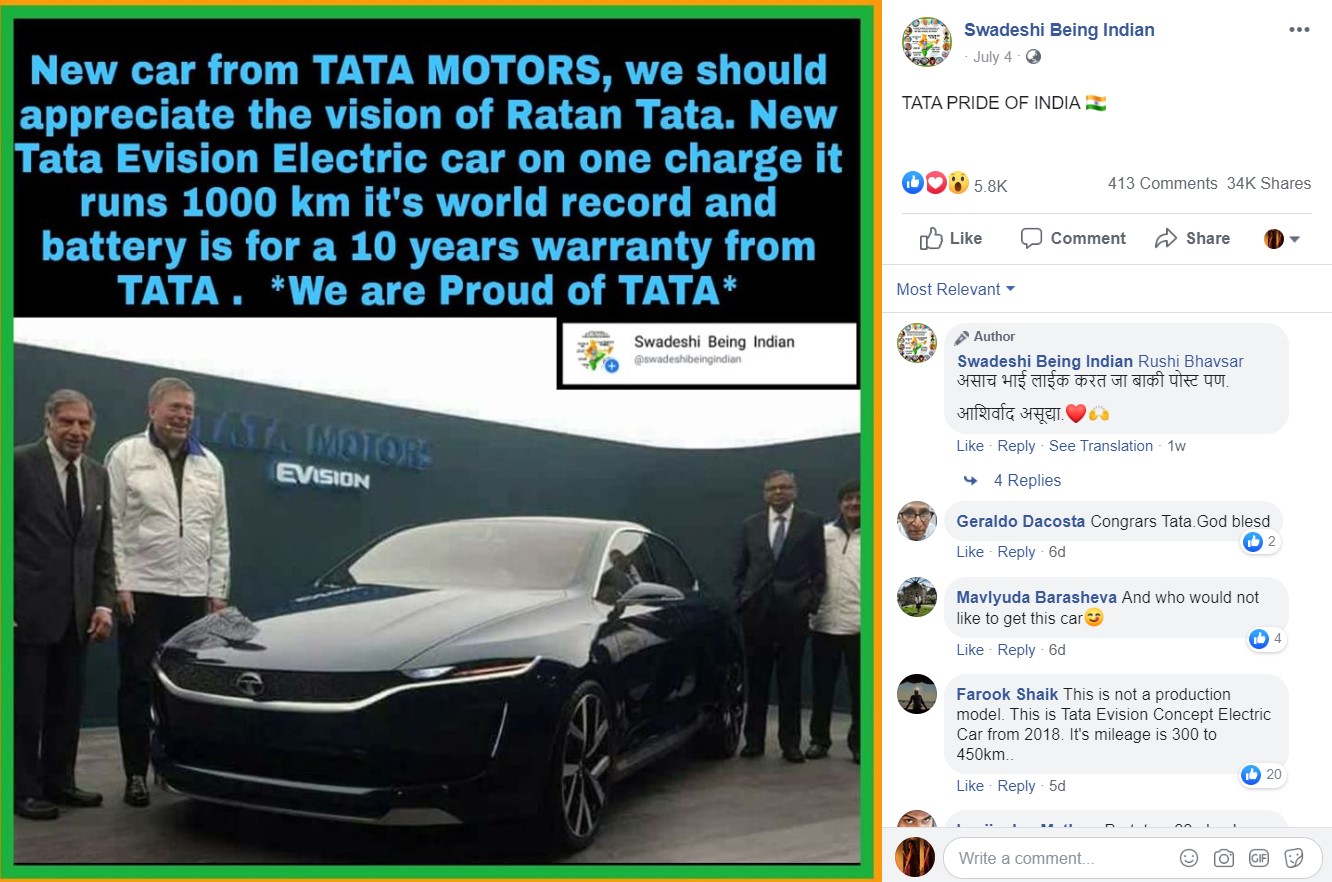 A Twitter user shared the same image in which the former chairman of Tata Sons can be seen along with Tata EVision Electric Car. 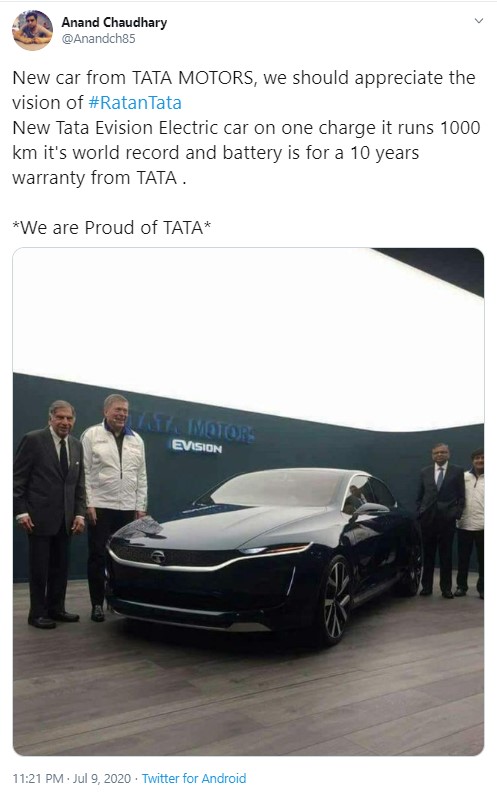 These posts on social media platforms claim that claim the Tata EVision Electric Car requires no fuel and can run for 1000 Kilometers in a single charge, adding Tata Motors is also offering a 10 years battery warranty. Furthermore, some versions also mention the Tata Motors EVision Sedan has been priced at Rs 25 lakh (Ex-Showroom) and is released or going to release soon.

In our investigation, we found these viral claims fake.

At the time of writing this article, there is no official announcement about the EVision Sedan Car production or release date.

In 2018, while celebrating its 20th year at the Geneva International Motor Show, Tata Motors premiered the Tata EVision Electric Sedan concept. The company also said it is based on Tata’s new modular OMEGA platform (Optimal Modular Efficient Global Advanced’ Architecture). You can watch the same in the video.

You can hear MD and CEO of Tata Motors, Guenter Butschek talking about the concept where he said:

“We can develop an attractive battery-powered electric (car) for the Indian market with a range of over 300km (per charge). If the battery development goes as we’ve seen, at this point in time, it would be possible for us to even offer a range of 400km”

Back in 2018, after the launch of the concept car, similar news began circulating on WhatsApp and other social media platforms along with pictures and videos. Head of Corporate Communications of Tata Motors, Suresh Rangarajan clarified the matter saying:

“It’s fake news that has been traveling far and wide – no such announcements made by the company. Someone’s imagination running wild.”

As per a Times of India report, in January 2020, CEO & MD of Tata Motors Guenter Butschek said that the company’s electric plans, cost-cutting, and more. He also said the company debuted a concept in Geneva 2018, based on Omega architecture. He suggested it is technically feasible, but not commercially viable. Furthermore, Butschek mentioned Tata is already offering a Tigor EV, a Nexon EV, and an Altroz EV. All the new products based on the Alfa architecture will provide an electric variant, he added.

In conclusion, posts on social media platforms with claims about the launch, speed, and warranty about Tata EVision Electric Car are fake.