It is true that the tax for One liter of Diesel was Rs 3.46 during the UPA government while it is Rs 31.83 for one liter of diesel under present NDA government.

Amid the continuous increase in the prices of petrol & diesel, a message is round on social media claiming that before 2014, under UPA government tax(excise duty) for one liter of Diesel was Rs 3.46 while under NDA government,  tax for one liter of diesel is Rs 31.83.

An infographic with pictures of former PM Manmohan Singh and PM Narendra Modi is being shared with a message written on it that says, "Dear Indians When you go to sleep tonight. Keep in your mind that Dr. Manmohan Singh's govt used to Tax You Rs 3.46 for One liter of Diesel While Mr. Modi's govt is Taxing you Rs 31.83 for one liter of diesel. You choose speech over Leadership, The Joke is on You!". 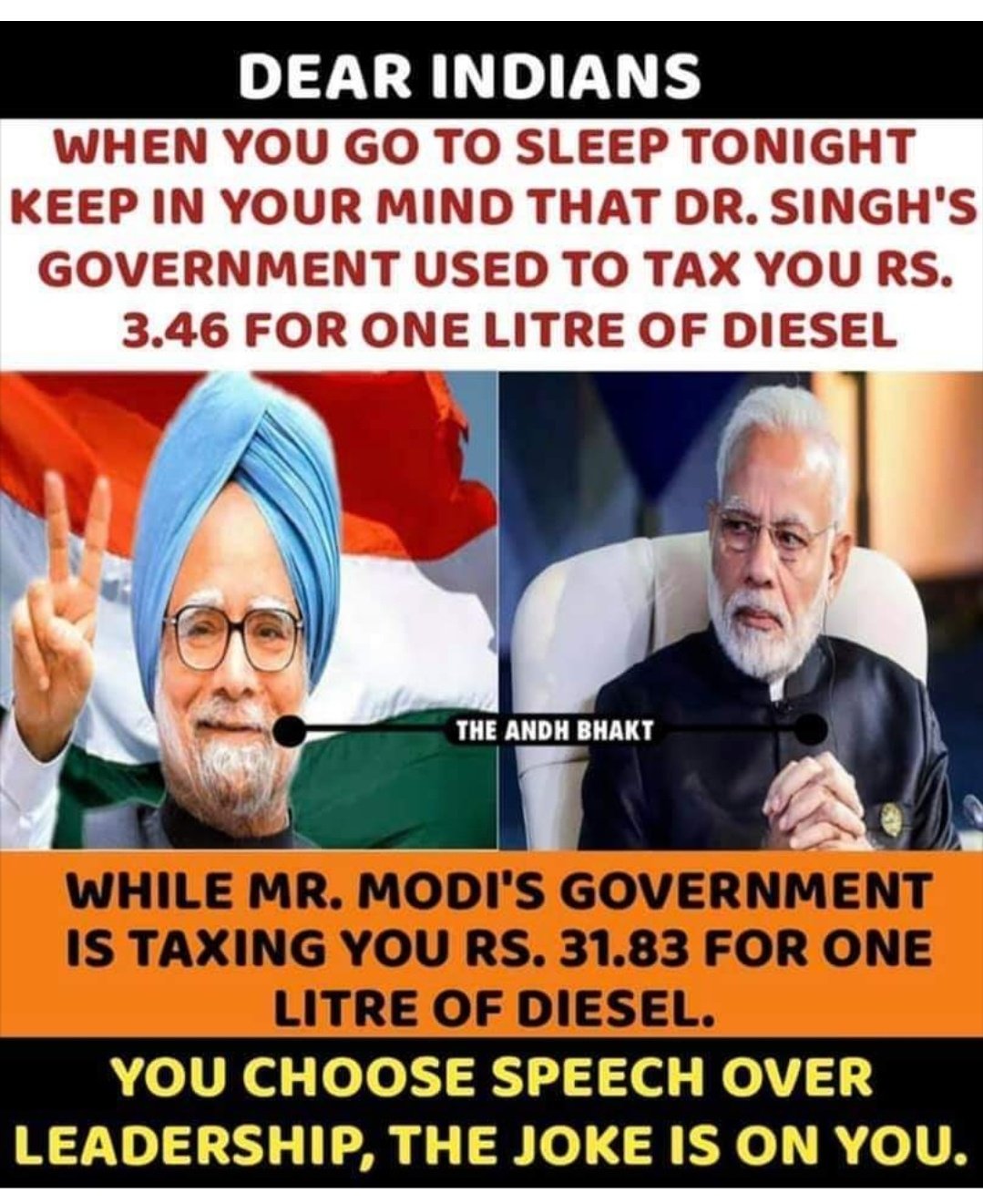 We received a request to verify the claim. 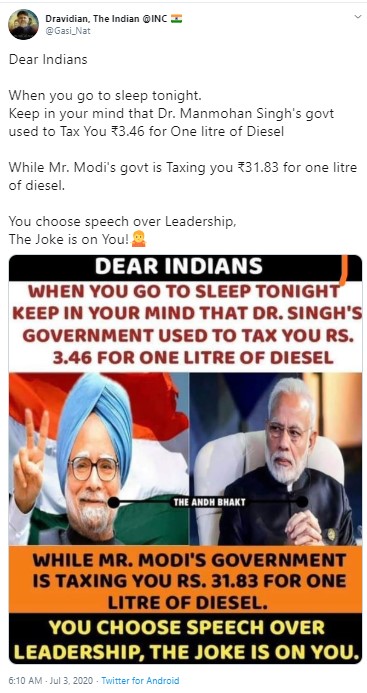 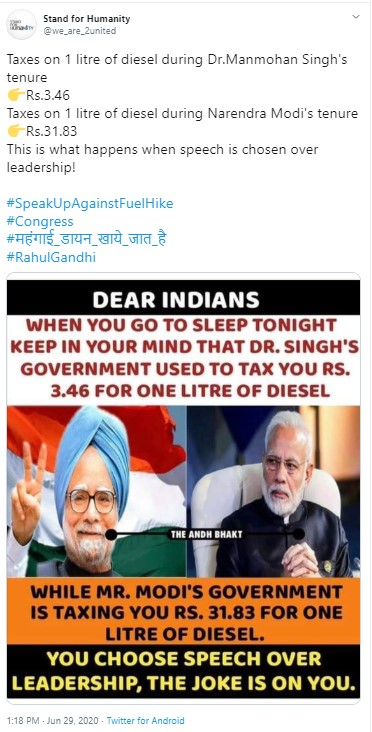 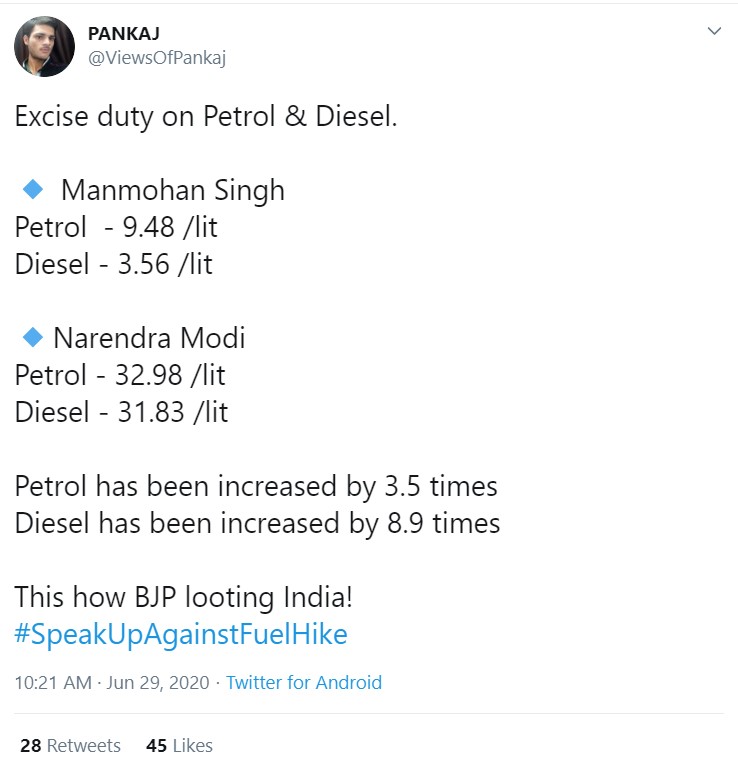 The condemnation started pouring in after a continuous surge in prices of petrol and diesel rates for over 20 days. In Delhi, the Petrol costs Rs 80.38 per liter whereas the price of diesel stands at Rs 80.40 per liter.

The truth behind the claims

What factors determine the rate of petrol and diesel?

1. The price of crude oil in the international market.

In 2011, the crude oil peaked at around USD 112 per barrel and the retail price of petrol in Delhi then was Rs 63.37 per litre and price of diesel was Rs 41.12 per litre. Back then, excise duty on petrol was at Rs 14.35 a litre and diesel at Rs 4.60 per litre. In 2015-16, crude oil hit a low of USD 46 per barrel but the price of petrol and diesel still continued to increase. After 2014, the international crude oil prices have come down to 73% of what it was, but the price of fuels has soared due to the high taxation.

India has the highest taxes on fuel in the world. Taxes now comprise over 69 per cent of the retail price of the two fuels.

As per reports, the excise duty on petrol increased 142 per cent and diesel by 429 per cent since the Narendra Modi government took charge for the first time in 2014.  Since then, duties were revised 11 times upwards and two times downwards.

However, the state governments are equally responsible for such steep prices of fuels. The state governments can also reduce the prices of petrol and diesel by reducing the VAT and other taxes levied by them. In May, the Union government hiked excise duty on petrol by a record Rs 10 per litre while the duty on diesel went up by Rs 13 per litre. In the meanwhile, as many as 13 states announced a hike in their own fuel taxes.

At present, in Delhi, the Petrol costs Rs 80.38 per litre whereas the price of diesel stands at Rs 80.40 per litre after fuel prices went up for a consecutive 22 days. The price is remarkable as for the first time ever, diesel became more expensive than petrol in some states.

The government is expected to gain nearly Rs 1.6 lakh crore in additional revenues this fiscal from these excise duty hikes. However, the rise in duty on fuel is unlikely to offer any major relief to the government as demand for oil in the country has also taken a big hit. Petrol and diesel sales by state refiners dropped by a record 61% and 56.5%, respectively, in April from a year earlier.