A local cop sharing a first-hand account of the incident clarified that a civilian and three CRPF jawans were injured in firing by the terrorists.

On July 1st, a civilian, 65-year-old Bashir Ahmad Khan, and a CRPF Head Constable Deep Chand were killed when militants opened fire on security forces on the outskirts of Sopore, a town in the Baramulla district of Jammu and Kashmir. Three other CRPF soldiers were injured when they got off their vehicles to set up a routine checkpoint and militants hiding in the attic of a mosque started firing indiscriminately.

Soon after the attack, an image of the 3-year-old grandson of the deceased civilian sitting on his dead body was released which was widely shared on social media platforms. The police rescued the toddler from getting hit by the bullets.

However, amid this, many people on social media users started sharing the image and claiming that the boy’s grandfather was killed by the Indian Army. 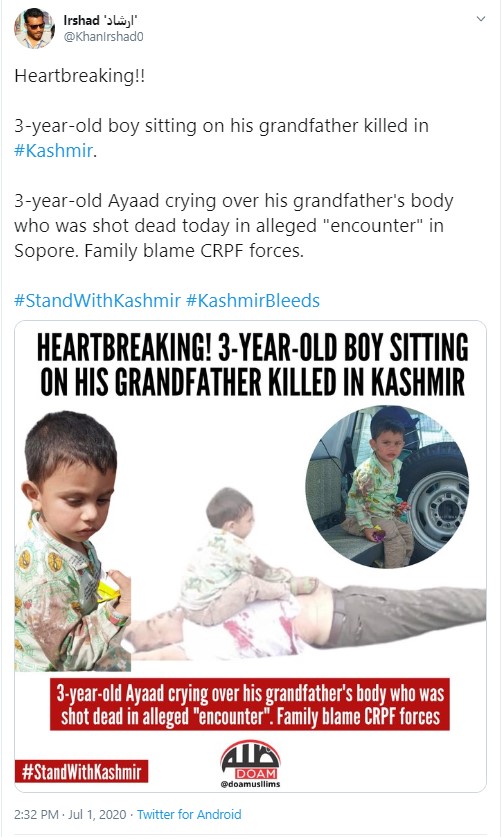 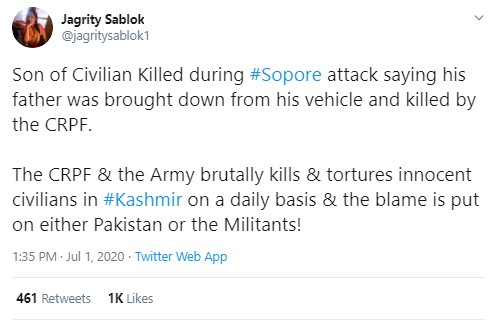 Aljazeera, a Qatar based media organization also published a report on the incident, quoting family members of the deceased accusing the security forces of killing the 65-year-old civilian during the gunfight.

However, all these claims were dismissed by the Police.

Refuting social media claims that the old man was brought down by the CRPF, Sopore Police also issued a statement. Calling the claims baseless and far beyond the facts, Sopore police said that action would be initiated against those spreading rumors. 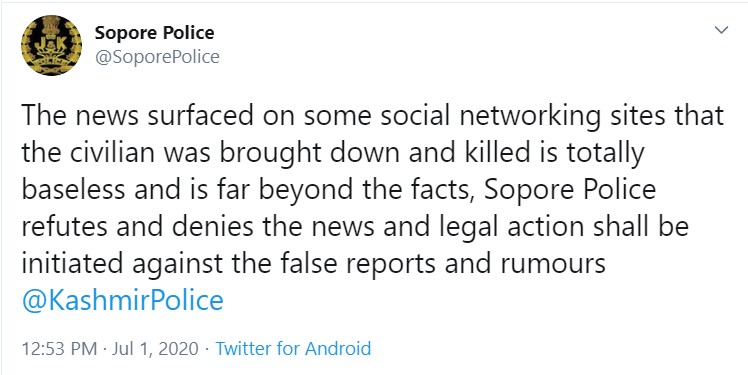 Imtiyaz Hussain, Senior Jammu, and Kashmir police officer shared the first-hand account by a local cop in Sopore about the terror incident on Twitter. In the video, he explained that the terrorists started firing indiscriminately from the upper floors of a mosque on the opposite side of the road. After the firing started, a civilian and three CRPF jawans were injured. He recollected, how for them, the greatest challenge then was to rescue the 3-year-old toddler who was roaming around helplessly near his grandfather who lay there in a pool of blood along with three CRPF personnel. The army chose to rescue the child first, instead of picking up the injured CRPF personnel and the civilian, he recalls. 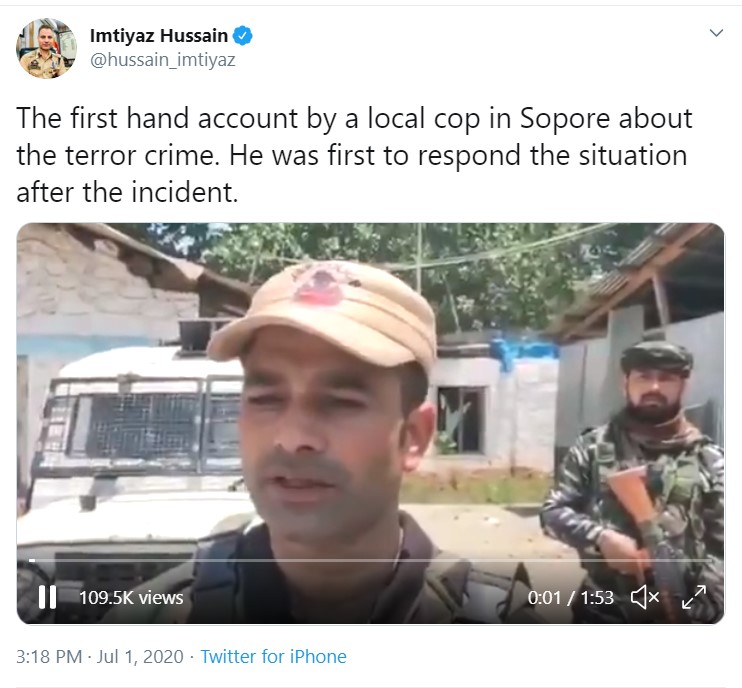 Meanwhile, Zulfiqar Hasan, ADG Central Reserve Police Force said that the allegations that the CRPF took out the civilian from the car and shot him is untrue and reiterated that "he got caught in the firing by terrorists".

"It was a very unfortunate incident that he had got caught in the firing by the terrorists. I think some people have tried to give it a spin by saying that the CRPF took him (the deceased civilian) out of the vehicle and shot him. It's totally untrue," he said.

"After examining a lot of technical details including pictures, we are very confident about what has happened. I would request the people that they should blame the militants that they are hiding inside mosques. The man has been killed by the terrorists firing from a mosque," he added. The ADG further said that "there is no question" of the involvement of the CRPF in the incident. "The firing by the CRPF was restrained so that we do not cause any damage to the mosque," he further added.