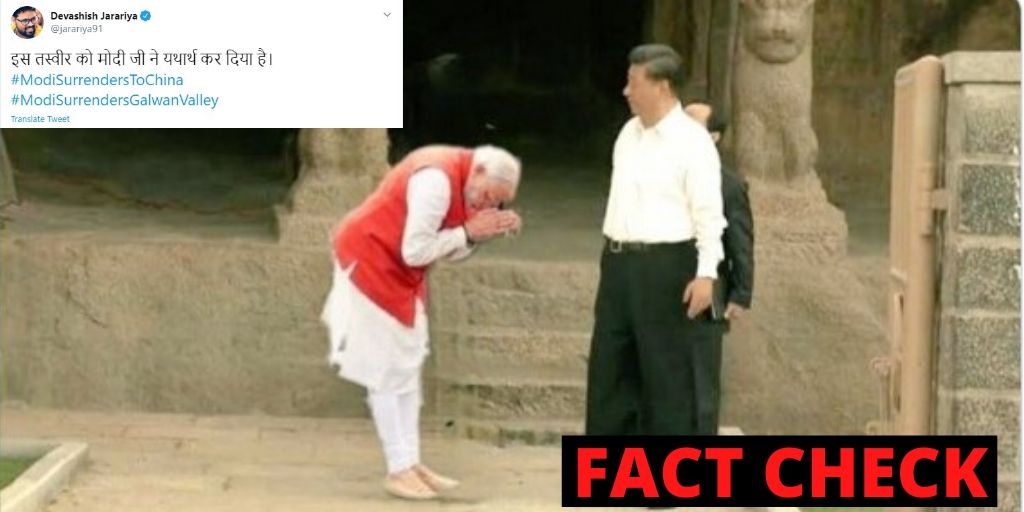 The viral of PM Modi bowing to Chinese President Xi Jinping is morphed. The image has been edited by using two different images of two different times.

In the backdrop of recent clashes between India and China on June 14,  an image of Prime Minister Narendra Modi and Chinese President Xi Jinping was shared on Twitter. INC member Devashish Jarariya shared the image saying "This picture has been made real by Modi ji. Modi surrenders to China" 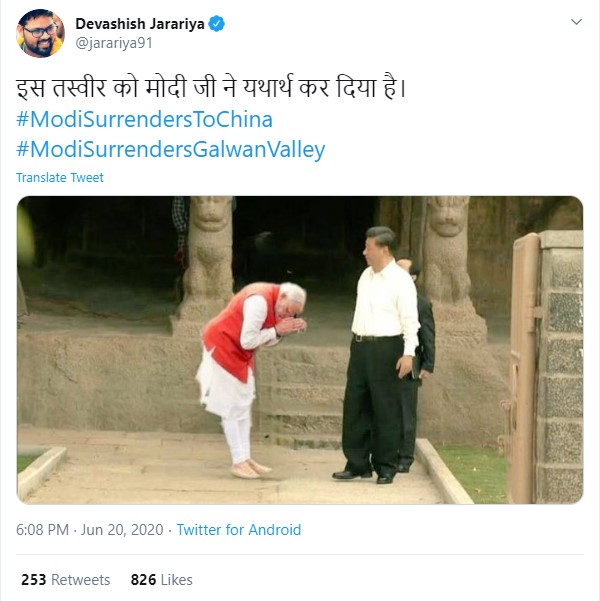 At the time of writing this article, this post has been reshared over 150 times.

The image in which PM Modi can be seen bowing down to Chinese President was also by another user on Twitter with a caption "Andh bhakts worshipping Modi. While Modi worshipping xinping " 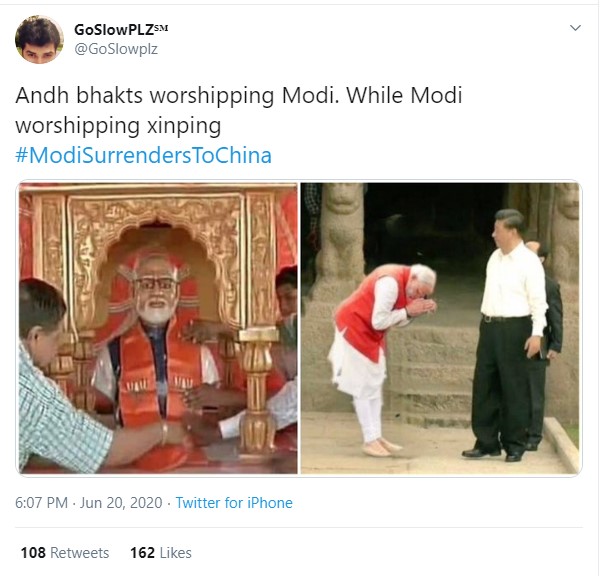 The viral image is morphed

In our investigation, we found that this viral image is morphed. The image is edited by using two different images of different times.

The first image dates back to 2014 when PM Modi visited Southern city, Tumkur to inaugurate a project and greeted then Tumkur Mayor, Geeta Rudresh when she came to welcome him.

The second image was taken when Xi Jinping was on a two-day visit to India in October 2019.  PM Modi welcomed Chinese President Xi Jinping in coastal town of Mamallapuram. Both the leaders took a tour around the famous caves and stone sculptures around Mamallapuram. 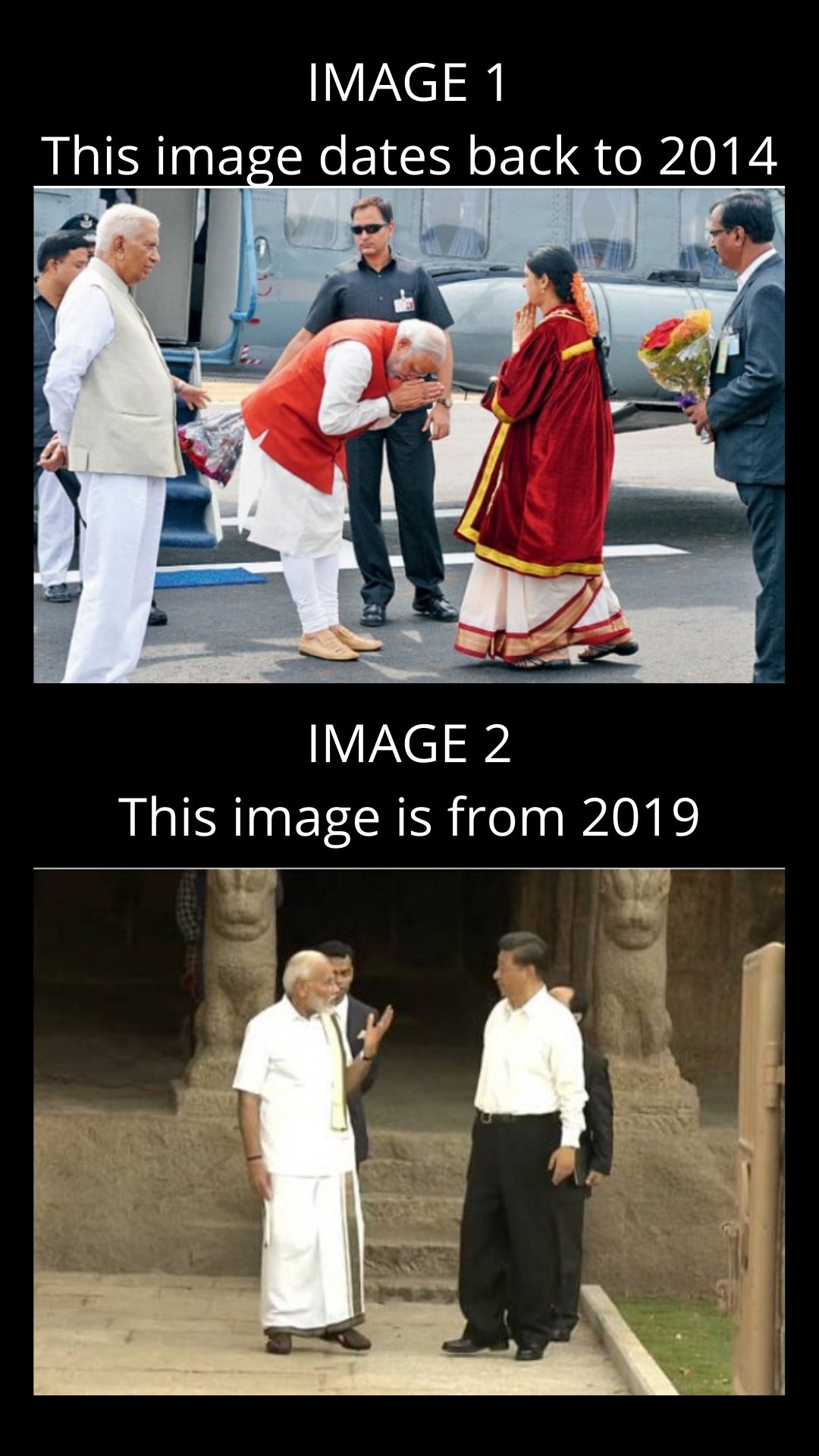 The viral image was edited in such a way to show that Narendra Modi bowed down to Chinese President.

Earlier also, the first image has been shared with a fake claim that PM Modi bowed to the wife of Indian industrialist Gautam Adani.

Later on, when people pointed out that the image is fake,  in his defense, Devashish Jarariya put out a tweet saying, "The Bhakts are saying the photo is fake Sir, the caption of the photo that I have written is not related to an image being fake I have written that Modi ji has made this photo (whether fake) real." 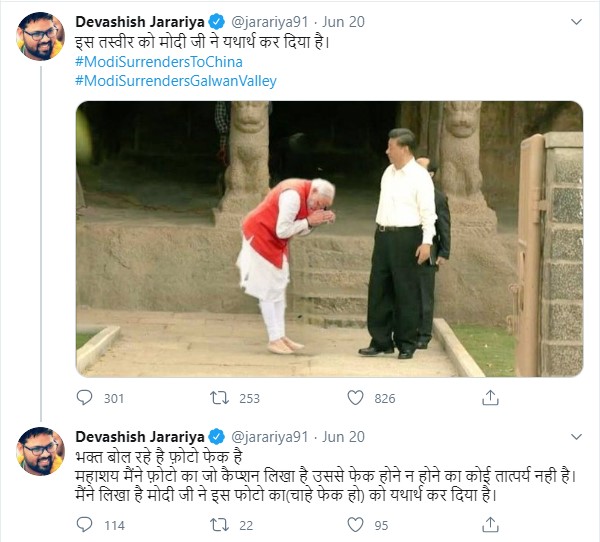 In conclusion, the viral of PM Modi bowing to Chinese President Xi Jinping is morphed. The image has been edited by using two different images of two different times.