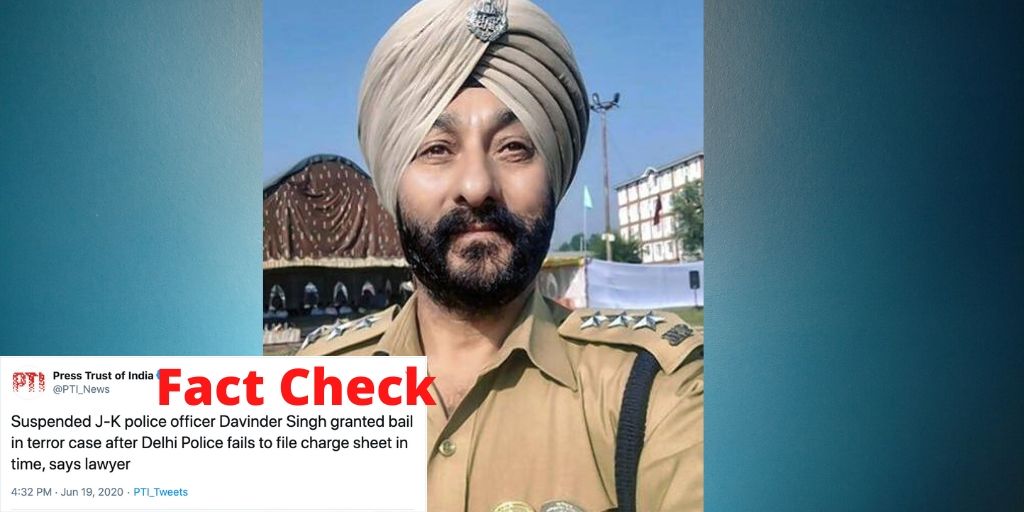 The suspended DGP of J&K Davinder Singh is not being released under bail but still continues to be under the custody of NIA.

Several social media users including eminent names broke into criticisms after it was tweeted out by top news agencies that the now-suspended DGP of Jammu and Kashmir has been granted bail after the Delhi Police failed to file a charge sheet in the given period of time.

Congress MP Shashi Tharoor wrote, "We all want to ask “How did the government allow this to happen?” But the real question is “How do we as Indians allow the government to get away with this shameful non-performance?" 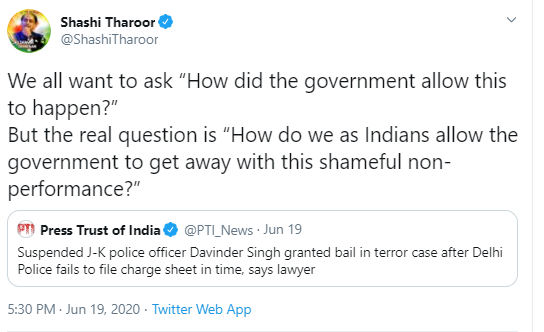 A Twitter user replied to the PTI's tweet, "Pregnant women booked under UAPA for a non-bailable imprisonment but a person caught red handed with a terrorist goes free because Delhi police takes no action.... Now that's a new low for all involved". 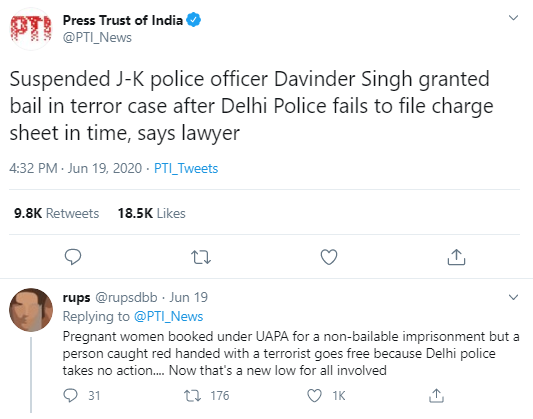 Let us look into the background and nature of the arrest and bail of Davinder Singh. The suspended DGP of J&K was caught by J&K Police on January 11th when he was traveling with militants. Along with him, Irfan Shafi Mir (a lawyer), Hizbul Mujahideen commander Syed Naveed Mushtaq and his associate Rafi Ahmad were also arrested. The Delhi court has granted bail to Singh and the lawyer Mir as the charge sheet has not been filed by the Delhi Police in the issued time period. The bail was granted after furnishing a personal bond in the sum of Rs 1 lakh each with two sureties each in the like amount. A response by the Investigation Officer for this case was filed before the court and it read that, “investigation in the instant case has not been concluded yet, hence charge sheet has not been filed”.

This does not mean that Singh will be released from jail which seems to be the understanding of many. Singh has a case filed under the National Investigation Agency and he continues to be in judicial custody. The official account of NIA has also reported that the charge sheet against him and the other arrested will be filed in the first week of July 2020. While replying to Shashi Tharoor ANI wrote, "Delhi Police had arrested Davinder Singh in a separate case. He continues to be in judicial custody in NIA case. Investigation is in full swing in NIA case and a chargesheet will be filed against Davinder Singh and other accused persons in the first week of July, 2020".

In conclusion, suspended DGP of J&K Davinder Singh is not being released under bail but still continues to be under the custody of NIA.