Fact Check: An old video of overcrowded train in Bangladesh shared as Shramik Special for Migrants 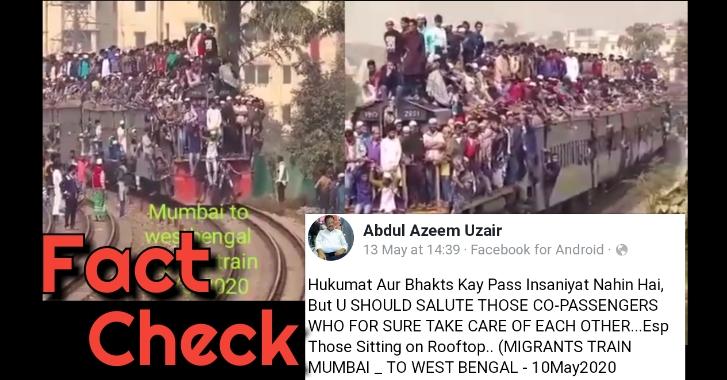 The viral video is two years old from Bangladesh. It has nothing to do with India or its migrant crisis.

A video of an overcrowded train in which people can be seen sitting on the roof and hanging on doors and windows is going viral on social media as a special train carrying migrants from Mumbai to West Bengal.

A Facebook user name Abdul Azeem Uzair shared the video with a caption “Hukumat Aur Bhakts Kay Pass Insaniyat Nahin Hai, but you should salute those co-passangers who for sure take care of each other. Specially those Sitting on Rooftop.. (MIGRANTS TRAIN MUMBAI _ TO WEST BENGAL - 10May2020)". 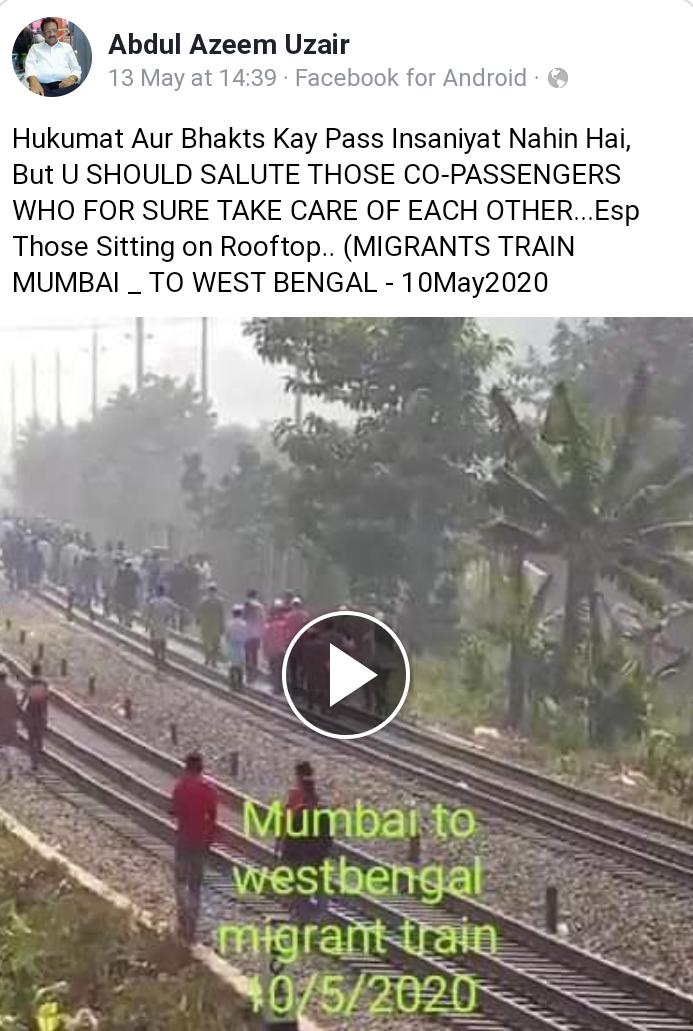 The video is being widely circulated on Whatsapp. You can watch the viral video here:

In our investigation, we found that the viral video is two years old from Bangladesh. It has nothing to do with India or its migrant crisis.

After doing reverse research of the video using keyframes, we found a video on YouTube published on 24 February 2018  with the title, "Most Crowded Train in the World- Bangladesh Railway".

According to the description of the video "Bishwa Ijtema Special Train 2018. This is not a regular situation of Bangladesh Railway (BR). This video has been taken on the occasion of Bishwa Ijtema in 2018. Bishwa Ijtema is one of the biggest annual gatherings of Muslims in Tongi, Gazipur, Bangladesh, by the banks of River Turag. With a view to facilitating the movement of Muslim devotees of the Biswa Ijtema, Bangladesh Railway (BR) has made arrangements to operate special trains on different routes of the country. This kind of Ijtema special or Munajat special Trains are used to bring and return those peoples in the Ijtema ground and home".

Amid the novel coronavirus outbreak in the country, Railways Minister Piyush Goyal announced on 16 May that the railways are ready to run 'Shramik Special' trains from any district in the country to provide relief to migrant labor.

According to the new guidelines issued by Indian Railways, Shramik Specials, which have so far been running without any stops on the way, are now allowed to carry up to 1,700 people. The special trains have 24 coaches, each with 72 seats. Until now, only 54 people have been allowed in each coach, with the middle berth left empty to maintain social distancing, meaning each train carried about 1,200 passengers.

In conclusion, The viral video is two years old from Bangladesh. It has nothing to do with India or its migrant crisis.