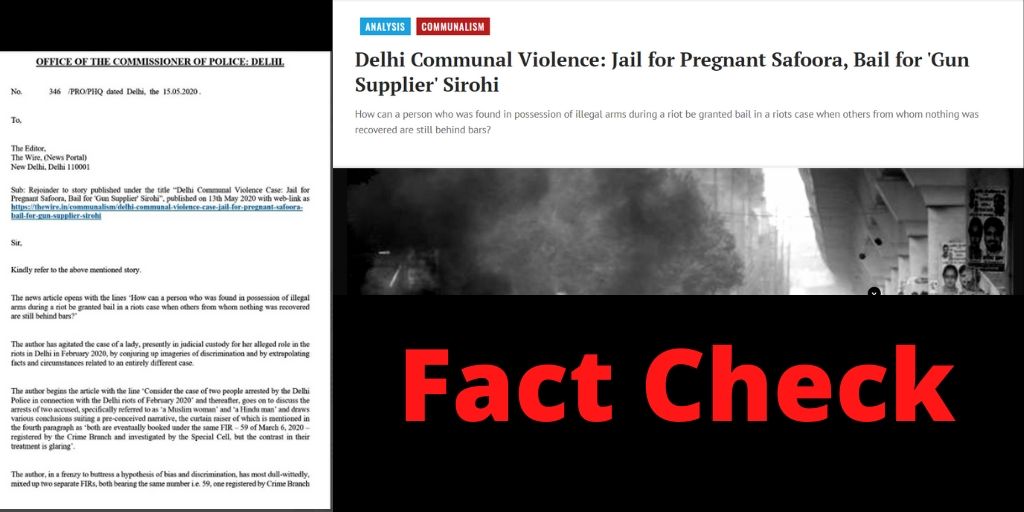 Delhi Police called out The Wire for publishing misleading news about the arrest of Safoora Zargar and Manish Sirohi.

The Wire had recently published an article that criticized the Delhi Police and court’s move in the arrest of Jamia Millia Islamia student Safoora Zargar and the arrest and bail of Manish Sirohi. However, in this act of criticizing the proceedings of the law, The Wire had misunderstood facts and has published misleading information which was pointed out by the IPS ( Mandeep S. Randhawa) through a letter to the editor of The Wire and this was tweeted out by the Delhi Police as well.

Here is the letter that was written by the IPS Mandeep S. Randhawa, which was rejoindered to the news article published by The Wire by the Delhi Police. 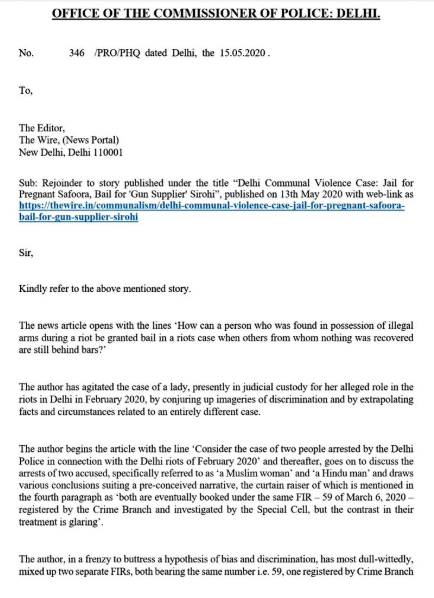 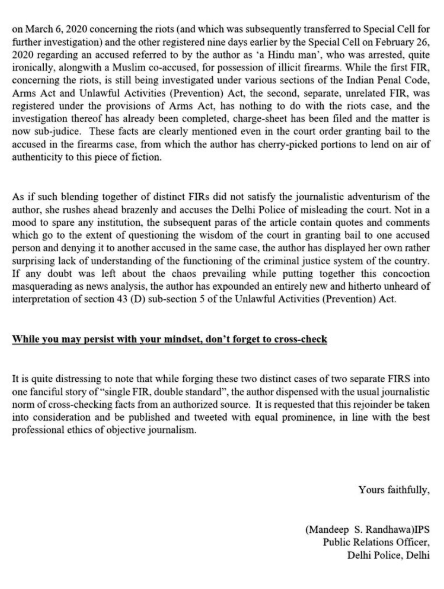 Firstly, let us look at the faulty information that was given in the initially published version of The Wire’s article (it stands corrected now). According to the letter written by the IPS, the author has mixed up two separate FIRs as one. They had published that both the accused have been booked under the same FIR No 59. But have been treated differently. However, as pointed out by the IPS, the FIR filed against Safoora was registered on March 6, 2020, by the Crime Branch and then transferred to Special Cell for further investigation. However, the FIR on Manish was registered nine days prior to that of Safoora by the Special Cell on February 26, 2020. The letter also points out how The Wire article points out to Safoora as a ‘Muslim Woman’ and to Manish as a ‘Hindu Man’ and brings in communal points whereas ironically Manish was also arrested alongside a Muslim man.

The letter points out that the two FIRs are completely different from each other, in that the FIR registered against Safoora is concerning the riots (still undergoing investigation under sections of IPC, Arms Act and UAPA), Whereas, the FIR booked against Manish is registered under the Provisions or Arms Act and has nothing to do with the riots and the investigation is complete and charge sheet has also been filed. Thus, mixing up the two unrelated FIRs is very faulty which was carried out and published by The Wire.
The letter also points out how the author of the article has questioned the wisdom of the court in granting and denying bail to the accused. Moreover, the interpretation of section 43(D) sub-section 5 of the UAPA by the author in her article has also been pointed out to be ‘entirely new’. In the article the author has written, “ the possibility of the accused being granted bail diminished significantly because of the pre-conditions that come with the anti-terror law. Section 43D, subsection 5, of UAPA says that no person accused of an offense under this act can be released on bail or on his/her own bond unless the public prosecutor makes a case for such release”. This interpretation of the section has been pointed out to be false by the IPS.

Furthermore, the letter criticizes how the author wrote a ‘fanciful story’ based on “single FIR, double standard” but has failed in basic journalism ethics of fact-checking. The IPS has also requested to consider, publish, and tweet this corrected information in line with “professional ethics of objective journalism”.

The article now stands corrected, however, the author stood firm in her other opinions stated in the article. She tweeted out the following, 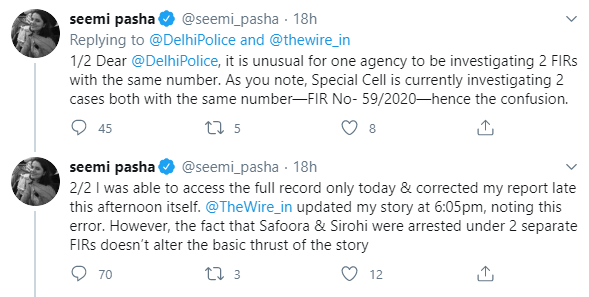 In conclusion, although the article has been corrected, The Wire stands firm in believing that the proceedings of the court have been in a biased manner. Many netizens had responded to the rejoinder given by the Delhi Police saying that actions should be taken against such publications of misleading news rather than merely pointing it out.