Fact Check: No, WHO has not claimed that vegetarians are not effected by coronavirus 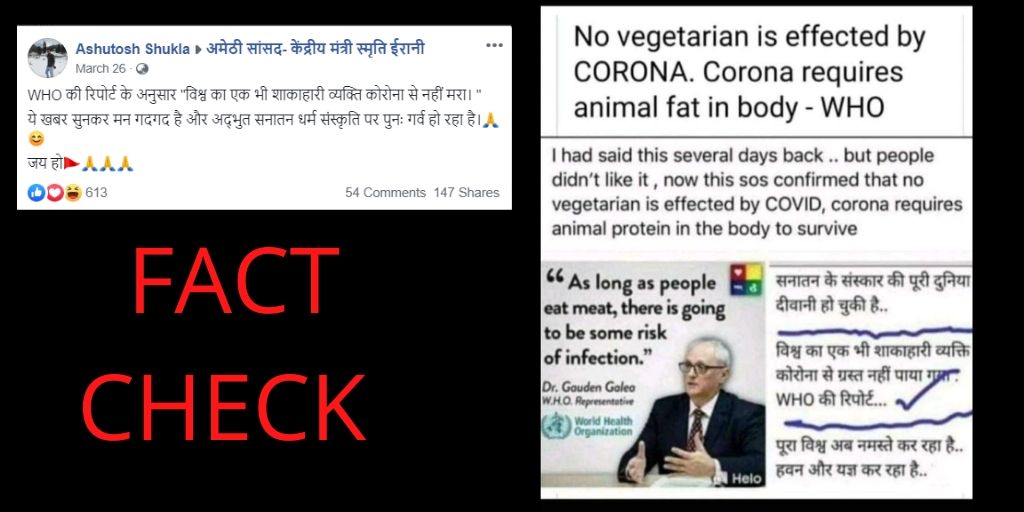 The claim that no vegetarians are affected by coronavirus was falsely attributed to WHO. The global health organization has not issued any such statement.

Recently, a graphic is being widely circulated on social media claiming that the World Health Organization (WHO) has said that no vegetarian is “effected by coronavirus”. The graphic attributed to WHO further claims that the virus requires animal protein in the body to survive. 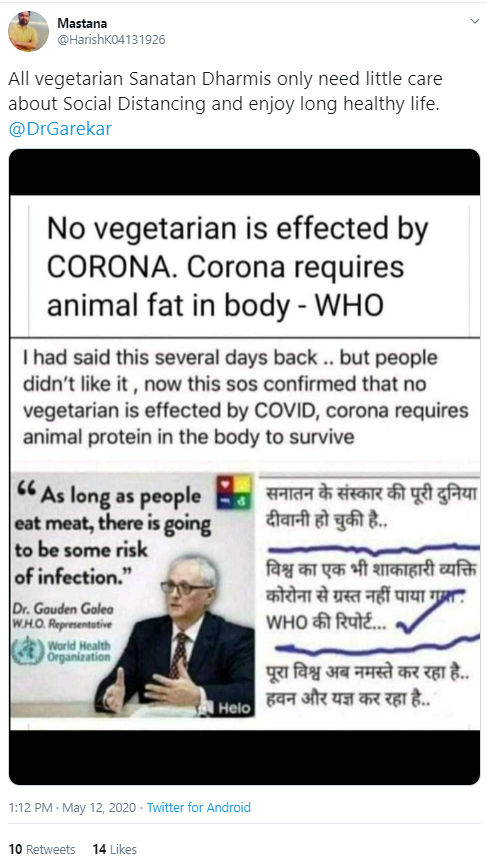 The graphic also includes a statement credited to WHO’s representative in China Gauden Galea, which reads, “As long as people eat meat there is going to be some risk of infection.”

A similar message is viral on Facebook and Twitter  since March that "WHO has stated  that no vegetarian is effected by coronavirus."

A Facebook user wrote, " The WHO reported that "not a single vegetarian person in the world died of the corona.Hearing this news, I am heartbroken and proud of the wonderful Sanatan Dharma culture."

The truth behind the clam

In our investigation, we found that the WHO has not issued any such statement.

According to an AFP report, India’s WHO representative Supriya Bezbaruah had rubbished the claim that a WHO report found that no vegetarian has contracted coronavirus.

However, the statement attributed to WHO’s China representative Gauden Galea in the viral graphic is true but was made in the context of 'exotic meat' that was being sold at the seafood market in Wuhan, China.  In a CNN report on the origin of the novel coronavirus being traced back to the seafood market in Wuhan, China, Galea's statement appeared. He said, "In our interface with the animal world, there will always be the danger of spillover and as long as people eat meat, there is going to be some risk of infection”. As the report solely focused on exotic animals being sold at Wuhan's seafood market, it means that Galea's statement was made in the context of exotic meat. You can watch the relevant part at 3:40 mark.

In conclusion, the claim that no vegetarians are affected by coronavirus was falsely attributed to WHO. The global health organization has not issued any such statement.