Fact Check: No, the mob did not attack doctors and health care workers in Haldwani, Uttarakhand

There are many reports of doctors and medical staff being attacked in different parts of the country, but they were not attacked in Haldwani, Uttarakhand. The crowd who came out after a rumor in the area that the police came to arrest the Imam returned after the Imam and the ulemas appealed them to return.

A video is getting viral on social media claiming that in Uttrakhand's Haldwani, a mob abused and attacked doctors with stones after an imam of a mosque was found to have symptoms of coronavirus.

A twitter user named Ashish Singh Mahi shared the video in which a huge crowd can be seen on the road and people are raising anti-police slogans with a caption "The Imam of the mosque in Haldwani was found to have symptoms of coronavirus. When a team of doctors went to quarantine him along with 12 other people, Jihadis attacked the team of doctors with stones, sticks and abused them. If I do not call such peoples termites for the country, what should I say? " ( Roughly translated from Hindi ) 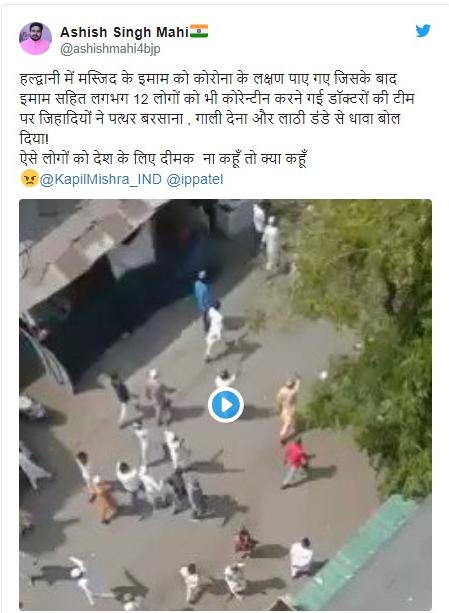 The viral post received 542 likes and 418 retweets at the time of writing this article.

In our investigation, we found that the claim shared with the viral video is false. In the video, people are protesting against the police after a widespread rumor in the area that they are arresting the Imam

After a keyword search on google, we found a news report about the incident on Live Hindustan. According to the article, people came out of their houses in Uttarakhand's Haldwani when the imam of a mosque in the Banbhulpura area of Haldwani was being quarantined after it was found that he had come in contact with members of the Tablighi Jamaat. The rumors of Maulana's arrest spread in such a way that more than 700 peoples gathered there in 5 minutes. 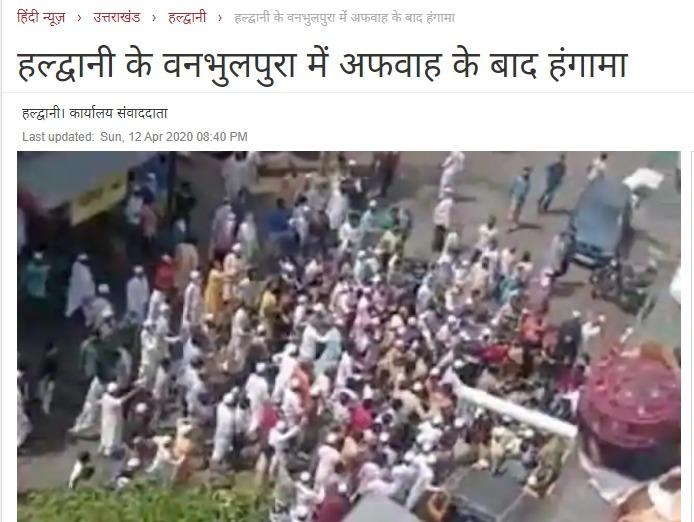 A large crowd gathered on a narrow lane in the area to protest but the matter was soon resolved with the intervention of the police. People went back to their houses after the Imam and the ulemas appealed them to return, saying there was nothing wrong in being quarantined for one's own health as well as that of those around. The Imam has been quarantined at the mosque.

We did not find any news report claiming that a mob attacked the doctors while they were taking Maulana to Quarantine. The video was shot when a large number of people gathered following a rumor of Imam of a mosque being arrested.

In conclusion, the viral claim is false that a mob attacked doctors in Haldwani. In the investigation, we found that the crowd came out after a rumor in the area that the police are arresting the Imam.

Several incidents of attack on doctors and medical staff

Even though this video is not related to the attack on health care staff and doctors, there are many videos and reports about attacks on doctors from different parts of the country.

One video, which has gone viral, showed a mob throwing stones at two female doctors wearing personal protective equipment in the central city of Indore.

The doctors had gone to a densely-populated area to check on a woman suspected of having COVID-19 when they came under attack.

A BBMP team including doctors and ASHA workers were attacked in Bangalore on 19th April.