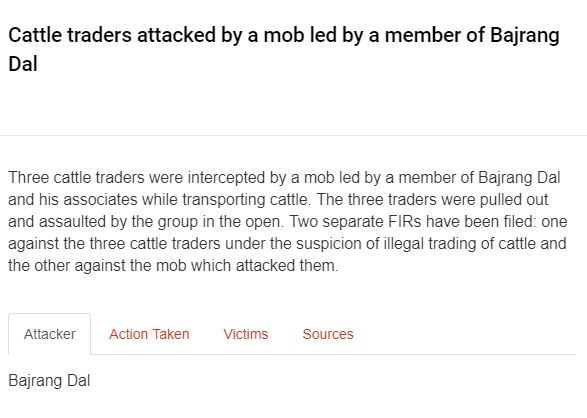 IndiaSpend has not mentioned that a case against illegal transportation of cattle has been charged on the Ranjeet Nut, Sanjay Nut, and Vishwajeet Paswan.  Illegal cattle transporters are called as cattle trader not smuggler by this way a drug smuggler can be also called as Narcotics goods dealer perhaps

A case has been lodged against a Bajrang Dal member and 20 others after three men transporting cattle for slaughter were beaten up at Hajipur in Vaishali district, around 20km north of Patna, on Tuesday. Hajipur Town police station house officer (SHO) Om Prakash said that the three cattle transporters, identified as Ranjeet Nut, Sanjay Nut and Vishwajeet Paswan, were rescued by the police from the mob and booked under relevant sections of the Animal Cruelty Act, 1960.

friends over Cattle Smuggling and slaughter

Cattle smuggler killed by a Mob

Role of Karnal cops under scanner in migrant murder case

2 person killed after they resisted attempt of cattle theft

One Cattle Smugglers arrested 3 fled from the scene

Cattle Smuggler killed by a mob

Crime Watch is an user generated database of crimes which affect our society. We have geo-tagged each of the crimes.

This database is managed by Fact Hunt.