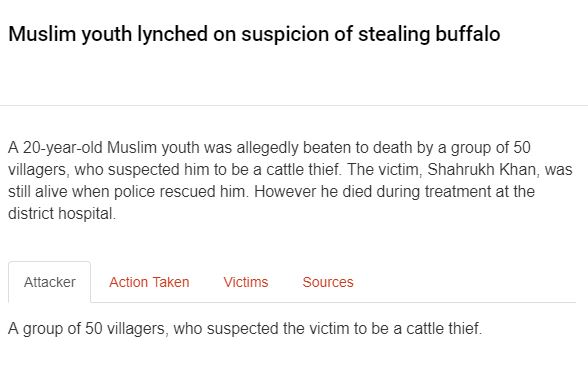 Meanwhile, Bareilly SP (city) Abhinandan Singh said, “Shahrukh Khan and his three aides, Majid, Pappu and one unidentified person, were in the process of stealing a buffalo from the house of a local farmer named Gajendra Pal around 3am on Wednesday. However, the farmer spotted them and raised an alarm. Within minutes, a crowd of nearly 50 villagers gathered there. While his aides managed to flee, Khan was caught and was severely thrashed for several hours.

friends over Cattle Smuggling and slaughter

Cattle smuggler killed by a Mob

Role of Karnal cops under scanner in migrant murder case

2 person killed after they resisted attempt of cattle theft

One Cattle Smugglers arrested 3 fled from the scene

Cattle Smuggler killed by a mob

Crime Watch is an user generated database of crimes which affect our society. We have geo-tagged each of the crimes.

This database is managed by Fact Hunt.